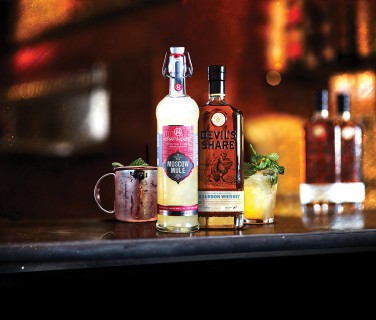 BY HIS OWN ESTIMATION, CHARLES JOLY MAKES THE WORLD’S LARGEST MOSCOW MULE – a few tweaks of the traditional recipe notwithstanding.

Despite a batching process measured in gallons instead of ounces, Joly, the co-founder of premixed cocktail brand Crafthouse Cocktails, wants to deliver the same level of quality and drinking experience that consumers would expect from a freshly prepared Moscow Mule. It’s something that he believes has been missing from the category of ready-to-serve cocktails.

“What’s been historically offered in a bottle has not been great,” Joly said. “What people have come to know in bottles are these drinks that are made to mimic and taste like a cocktail.”

Eschewing preservatives and flavor enhancers, Joly, an acclaimed Chicago bartender, now oversees commercial-scale blending of vodka, ginger beer, fresh lime juice and cane sugar. Filled into swing-top 750 mL glass bottles and shelf-stable when sealed, the Mule is one of three varieties in the Crafthouse line, which also includes a Southside and a Paloma.

Joly started Crafthouse Cocktails in 2013, along with business partner Matt Lindner. At a time when small-batch spirits and mixers are in high demand, they see broad opportunity to capture hearts, minds and tastebuds with convenient, premixed cocktails that address consumers’ desire for natural, artisanal products.

Joly’s not alone. In just the last two years, a range of super-premium prepared cocktail products have come to market, some developed by established spirit brands like High West and Jefferson’s Bourbon, some launched by service industry professionals, and other entrepreneurs who saw white space for better options than had currently been available.

Even the international conglomerates are getting into the mix. Last year the venture capital arm of beverage alcohol giant Constellation Brands acquired a minority stake in Crafthouse, citing a desire for “deeper knowledge of emerging opportunities.” Three months later Constellation bought Ballast Point for $1 billion, and included in the deal was the craft brewer and distiller’s budding line of canned cocktails. In October, Diageo launched Studebaker, a brand of premixed cocktails made with Canadian whisky. The line includes a Manhattan and an Old Fashioned.

“This is a new category,” Joly said. “We’re not rehashing what has been done in the past. We are, along with a handful of other brands, creating a new category. Now you have people that, in my case and the case of some other people doing it, are bartenders. This is what we do, making these products as an extension of our profession and our passion as opposed to them coming the other way from a business proposition and the being sent off to a lab somewhere where they’re made by people that really don’t even drink cocktails.”

Joly won’t mention it, but the category’s past – and present – includes Skinnygirl Cocktails, a line of low-calorie, spirit-based blends that burst onto the scene in 2009. Launched by reality television star Bethanny Frankel, Skinnygirl markets a range of bottled cocktails, including Margarita, Cosmopolitan and Sangria varieties, that primarily target female consumers. Within two years of its debut, Skinnygirl had annual shipments of 100,000 9-liter cases, and in March, 2011 spirits conglomerate Beam Global acquired the brand for $120 million.

Buoyed by Beam’s vast distribution network, sales of Skinnygirl surged by 388 percent and the brand reached the 500,000 case mark that year, becoming the fastest-growing spirits brand in 2011, according to market research firm Technomic. But in 2013, Skinnygirl sales were down 26 percent. Beam CEO Matthew Shattock blamed unfavorable summer weather for the poor showing, but the company’s annual report said something different, announcing that “the substantial decline in Skinnygirl is largely due to the substantial decrease of the U.S. ready-to-serve spirits category in 2013.”

Sales of Skinnygirl cocktails have since remained on a downward trajectory. According to data provided by IRI, a Chicago-based market research firm, the products pulled in $11.6 million in the 52-week period ending on Dec. 27, plummeting 31.3 percent from the same period a year ago. The overall category of prepared cocktails is down nearly 3 percent in that time frame, and aside from big gains for Jose Cuervo-branded products and Clubtails, which sells a line of can-packaged cocktails, most brands endured significant declines.

Dave Willis, the co-founder of Boston-based spirits maker Bully Boy Distillers, blames the category’s weakening sales on a selection that hasn’t evolved with the times. Despite widespread interest for and availability of artisanal spirits, Willis, whose company produces a ready-to-serve Old Fashioned and also a rum-based punch, sees a lack of similarly positioned offerings in the bottled cocktail category as contributing to a stagnant shelf.

Indeed, with the exception of Skinnygirl, the set has long been the dominion of summer-friendly cocktail blends, including pina colada, daiquiri and margarita varieties, marketed by brands like Malibu and Bacardi. The notion of sharing shelf space alongside those products is something that has caused most of the craft distilling community to shy away from developing packaged cocktails, Willis said.

Most, but not all. Willis embraces the idea of a bottled cocktail as a way to introduce the Bully Boy brand to new consumers in a form that he believes best showcases its spirits.

“It’s a great opportunity for small distilleries to flex their creative muscles,” Willis said. “Every craft distillery has a cocktail that’s made with their spirits that’s their favorite, and it’s nice if we can showcase the best expression of that cocktail and do it in a way that’s easy and approachable.”

Trey Zoeller, the president and founder of Jefferson’s Bourbon, concurs. Amid a renaissance in barrel-aged cocktails that are prepared and served in upscale bars across the U.S., Zoeller collaborated with Esquire magazine to produce a bottled offering. Two years in the making, the Esquire & Jefferson’s Manhattan: Barrel Finished Cocktail debuted on the market in April. Crafted with six-year-old bourbon that has been cut down to 82.3 proof, sweet and dry vermouth, and barrel-aged, spiced cherry bitters, the ready-to-serve beverage was created to draw interest from bourbon enthusiasts as well as consumers new to whiskey.

“Almost everybody getting into the whiskey and bourbon category specifically, they’re not going to go straight into drinking [the spirits] neat or on-the-rocks,” Zoeller said. “You ease into that, and cocktails help.”

Zoeller said that while not every retailer understands how to sell bottled cocktails, the Jefferson’s Manhattan has been doing well, particularly in the Northeast. Expanding awareness, education and, ultimately, sales of the product will require significant sampling and continued positioning alongside Jefferson’s bourbon, he said, noting that side-by-side shelf placement has been an effective retailing tool.

Berkshire Mountain Distillers, on the other hand, wants its Gin & Tonic and Vodka & Tonic cocktails placed in coolers. Chris Weld, the founder of Berkshire Mountain, sees cold shelf space as important for trial of the brand’s single-serve cocktails, which include the Gin & Tonic, a blend of its Greylock Gin and an unfiltered tonic created by the Sheffield, Mass.-based distillery and made with cinchona bark, citrus peel and other botanicals. (The bark gives the beverage a distinct brown color, and it requires a lot of education – and sampling – to get consumers comfortable with it, Weld said.)

Unlike Jefferson’s and Berkshire, however, brands like Crafthouse Cocktails and Austin Cocktails, which markets a line of better-for-you cocktails made with herbs, fruit juices and organic agave nectar, are independent and have to rely on introducing themselves to the public one store demo at a time. Each, however, has landed an airline: A two-serving bottle of Crafthouse Cocktails’ Moscow Mule is available on select United Airlines flights, while Austin Cocktails’ Cucumber Vodka Mojito had a limited run on Virgin America’s beverage menu.

While few beverage brands of any type are likely to replicate the rapid rise of Skinnygirl, Joly sees opportunity in a similar distribution pattern – if he can take it beyond its current footprint of four U.S. states. While Joly described the prototypical Whole Foods shopper as “exactly the type of person that enjoys” Crafthouse products, he, like a growing cohort of premium brand owners, is also eyeing placement in Target as the next step in getting his products into liquor cabinets and refrigerators across America.

“Target has a refined selection and the product that they carry is of a good quality,”Joly said, noting that Crafthouse has already undergone several successful retail tests at the mass merchant. “I think they’re a great place for us to be.”