This is the big one, although it’ll still take time for the results to be digested. Meanwhile, however, John Foraker gets to stick around, Jeff Bezos gets a new toy, and the rest of the industry has to adapt to the new, e-commerce driven reality. We await our order-by-drone, while Instacart makes deals to survive and Wal-Mart prepares a counterattack.

He was billed as the voice of innovation at DPSG for years to come, but something went sour just a few months after Weiss turned over the keys to Larry Young. Insiders say there was a really, really loud argument. Others insist Weiss has a lot of money to use to dry any tears he might have. The rest of us wonder what might have been.

Sale of Stonyfield Farm to Lactalis

In order to absorb WhiteWave, Danone had to do this, but it makes for an interesting situation: Stonyfield is once again competing with its former parent company. We’ll see who taught the most to whom.

Two years ago, it was on the brink of collapse, with bad press, strange flavors, and a troubled CEO. But the brand has turned its share price – and revenue – around behind a focus on carbonation, not cola. Now it’s looking to acquire.

The co-founder of sports drink brand BodyArmor has declared that the company is “not here for bronze medals; it’s gold or nothing.” Repole, who co-founded vitaminwater as well, has stocked his team with veterans from the company that made him rich. BodyArmor is entering uncharted territory for an entrepreneurial sports drink company, with a share of two percent and growing.

The Odwalla co-founder is making waves at Califia Farms, which has pulled in massive investment and is growing a plant-based, coffee-rich platform at 62.

Following the sale of Sweet Leaf Tea to Nestle Waters North America, Smith was ready to put the beverage business behind him. But just two years after the sale, he’s back in the gamewith High Brew Coffee.

As strong a pair to ever hug it out in the office, the former Clif Bar CEO and Plum founder has combined forces with Hawken, the innovation wizard from Bossa Nova, to create an earthy brew of adaptogenic, protein-rich drinks that are once again pushing the edge.

Creelman, who helped pioneer the premium cocktail mixer segment as the co-founder of Stirrings, finds himself once again changing the way people think about legacy beverage categories. As the founder of Spindrift, one of most dynamic brands in the sparkling water category, Creelman is back in the saddle again.

This term invokes images of fields of green leafy veggies and everything consumers think is good for them. Only downside? You could also stick it on a cow.

While the U.N. sponsored “Year of the Pulse” was officially 2016, this term for certain types of legumes hasn’t lost its popularity for conveying plant-based protein sources.

Defining a flexitarian lifestyle can sometimes be tricky, but generally the term refers to consumers who try to make some, if not a majority, of their meals plant-based.

While this term is clear and to the point, the downside is that it can sometimes leave consumers wondering, “if it’s not meat, what is it?”

“Made with Pasture Raised Plants”

Spotted on a soon to be released package of “burger” meat from Tofurky, the term brings fun and whimsy to what can sometimes be an overly serious category. 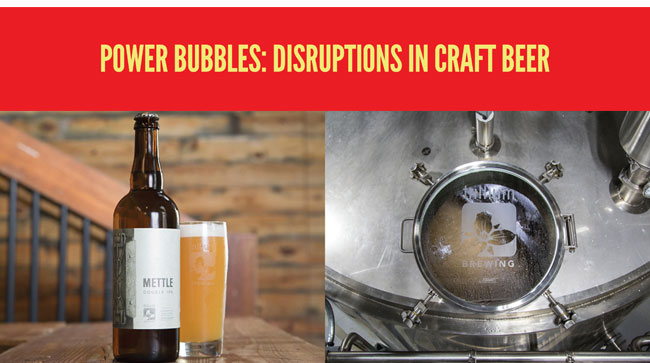 These two divisions have cherry-picked craft breweries and other emerging and innovative companies, but they’ve also moved to expand beyond beer to kombucha, tea-and-beer Radlers, and even media properties and homebrew suppliers.

Nearly 10 percent of U.S. craft beer was sold through a brewery taproom or retail storefront in 2016, as more consumers visited breweries to sample and purchase products directly from the producers themselves. And growler laws continue to loosen.

Launched in Massachusetts in 2010 by entrepreneurs Suzanne Schalow and Kate Baker, the Craft Beer Cellar franchise has rapidly scaled to 33 locations across 15 states. With a growing footprint, the duo are highly influential: they recently made headlines for pledging to blacklist beer they deemed “unfit for consumption.”

Also known as “New England IPAs,” they’re unfiltered, aggressively hopped, and cloudy. Some traditionalist brewers have criticized them as untrue to the style, but companies like Massachusetts-based Trillium Brewing, which has built a multi-million dollar business around the beers, disagree. “Haze is really just a byproduct of trying to make the most aromatically hoppy beer we can,” Zach Page, the director of brewing operations at Trillium told NPR earlier this year.

He’s brought massive scale and global ambition to craft, at a rate that forced other operations to accelerate their plans or try to define themselves locally. With Heineken now in control, he’s got money to burn.

Three years in and the connection is still strong; BodyArmor is developing a roster of athletes that could even give Gatorade a fight on the field.

She’s not just endorsing the new BLNDs line, she’s also saluting her partners, calling them “innovative female leaders” who “inspire us with their creativity.”

Timberlake didn’t take long to cash in on this investment; Dr Pepper Snapple Group paid $1.7 billion for the fast-growing brand just a few months after the deal was announced. Still, he’s outlasted the CEO who brought him on, Ben Weiss, and an appearance in a well-received Super Bowl commercial ratcheted up brand awareness.

DiCaprio is just one of several investors supporting this natural energy tea, alongside Channing Tatum and Marlon Wayans, but he’s the only one who has joined the board and pledged his shares to indigenous community groups in the Amazon.

Will and Jaden Smith – Just Water

At the Summer Fancy Food Show both Mike’s Mighty Good, from the Dr. McDougall’s team, and One Culture highlighted new instant soup cups. It’s cup-of-noodles for a more adventurous generation.

Long gone are the days of mystery meat in a tube form or overly dried-out jerky. With Duke’s, Field Trip and KRAVE all competing in convenience, options have gotten a lot meatier on shelves.

Having sold KRAVE to Hershey’s, entrepreneur Jon Sebastiani has set his sights on the humble marshmallow. Now his Sonoma Brands group is expanding the platform with Smash Crispy, a treat that really snaps, crackles and pops.

Shelves this year saw plenty of gummies in every shape and taste. From more sophisticated Rosé or beer gummies from Sugarfina to honey-sweetened options from The Lovely Candy Company, there were plenty of options to chew over.

Loved by all ages, mac and cheese has shed it’s neon orange glow. Although Annie’s White Cheddar is still a classic with the natural set, competitors such as Banza and Modern Table Meals have also brought legume based options to the set.

Representative product companies include Soylent, Ripple Foods, Impossible Foods, and Blue Bottle Coffee, but it also scored big with Wal-Mart’s acquisition of retail platform Jet. Also, yeah, it was in on Juicero.

Think lifecycle up to the last mile: Sun Micro co-founder Vinod Khosla is betting on efficient farms through Granular and Clear Labs; Aloha, Kite Hill, Hampton Creek and Impossible Foods will offer up plant-based nutrition, flavored, perhaps, with NuTek Salt. Instacart will get it there.

With Campbell Soup Co. as the fund’s sole limited partner, this $125 million fund has spread its bets between real food companies (Safe & Fair, Back to the Roots) and wide-ranging bets on agriculture, food production, and biotech. Oh, and Juicero.

A chef, food advocate, network star, and the co-founder of Food Policy Action Education Fund, in the past five years Colicchio has moved from serving food to serving notice to politicians that their votes on food issues are also on the table.

A different kind of celebrity chef, Kass has gone from public employee to power broker, graduating from the White House kitchen to a high-profile nutrition policy job, and then parlaying that into a wide-ranging portfolio of roles, including work as an investor, pundit, and technology advocate.

She’s gone from activist and investigator to commercial force. Simon, who once wrote “Appetite for Profit,” a book about the negative effects of the food industry, is now working on behalf of companies in the space, as the founder and leader of the Plant Based Food Association. She’s moved from the politics of your plate to putting the food there.

First, he brought Trader Joe’s to the East Coast. Then, the man who launched a thousand salsas and taught retailers that private label can be a profit center turned on the Daily Table, a new form of supermarket determined to provide affordable, wholesome food to the economically disadvantaged and underserved. It’s not for profit, but it’s not for free, either – and that’s the part that provides the dignity.

Long the recipe-provider-in-chief for the harried, Bittman’s journey has taken him from reporter to columnist, to activist to investor. Sure, the position at the Purple Carrot didn’t last long, but his next act was as a representative of Jana Partners – the hedge fund that shook Whole Foods to its foundation, ending up as one of its proposed board members.