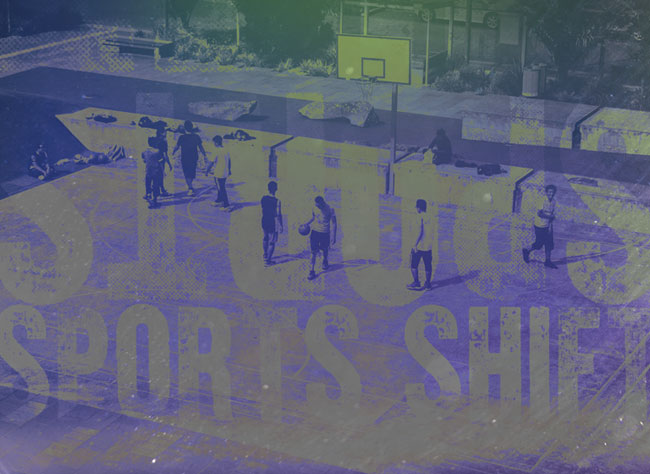 A commercial aired during the television broadcast of this year’s NBA Finals had a recognizable feeling to anyone familiar with sports drinks, which at this point is just about everybody. A star athlete, in this case Golden State Warriors guard Klay Thompson, puts himself through the paces of another grueling workout, then reaches for his favorite drink.

In a voice over, he speaks about how the beverage is packed with nutrients to help him refuel and protein for muscle recovery, adding that scientific evidence backs up his claims. As Thompson downs the drink, the commercial’s tagline appears prominently: “Built by Chocolate Milk.”

The ad doesn’t mean chocolate milk is poised to topple the sports drink empires built by Gatorade and Powerade, the deep-pocketed and enduring category giants backed by PepsiCo and Coca-Cola, respectively, but it may indicate a gradual shift that has been occurring over several years in consumer interpretation of what the category is supposed to represent.

While the isotonic, fruit-flavored and brightly colored drinks that have largely defined the category remain its dominant force, innovative brands are disrupting and in some cases cannibalizing the traditional sports drink by bringing the familiar call-outs of nutrients, electrolytes and protein across a broader spectrum of use occasions and target audiences.

Even as trends are shaping the future of the sports drink category, it would be premature to herald the arrival of a new age just yet. A survey of the numbers show that the established players are still far ahead of the chasing pack.

According to data provided by IRI, the total ready-to-drink sports drink category generated around $6.5 billion in total U.S. MULO sales for the 52-week period ending on May 14, 2017. As expected, isotonic sports drinks, and more specifically the PepsiCo-owned Gatorade, which is operated under the Quaker Oats division, dominated the field with over $5 billion in sales, an approximate 3.5 percent increase from the same period last year. Gatorade’s Perform family of products, which includes its most popular “thirst quencher” varieties, saw sales increase by just over 1 percent from the same period last year to around $3.2 billion. The brand’s individual lines, such as Frost and Fierce, also put up big numbers, generating $761 million and $307 million in sales, respectively.

Coca-Cola’s Powerade line trails behind the PepsiCo-owned Gatorade by some distance, but still represents over $1 billion of the total category. Powerade Ion4 line brought in over $783 million in sales in the same period last year, while its core (over $215 million) and Ion4 Zero ($214 million) lines have also solidified the brand’s standing as a protagonist in the cateogory.

But even in a pond occupied by a couple fearsomely built sharks, BodyArmor hasn’t been afraid to bare its teeth. The coconut water-based sports drink line has been making inroads, to the tune of $135 million in sales, a 127 percent increase compared to the same 52-week period ending on May 14 last year. While the brand’s core line enjoyed a 91 percent bump in sales over the period last year, bringing in over $111 million, BodyArmor showed its potential as a robust brand platform with the successful launch of SuperWater ($22.1 million) and the low-calorie option Lyte ($2.2 million).

Outside of the major players, activity was relatively muted, with private label sports drinks experiencing a 2 percent increase in sales, totalling just over $20 million in sales. But in a sign that the category may have more room to expand, Mountain Dew’s Kickstart, an energy-sports drink hybrid that blends coconut water, fruit juice and caffeine, boasted the biggest year-over-year increase of any brand in the category, jumping 154 percent to generate $21.3 million in sales.

Ask any athlete what they look for in a post-workout recovery drink and the answer is almost always the same: protein, and lots of it.

Sports drink brands have been eager to answer the call. PepsiCo-owned Gatorade launched a protein shake line in 2009, while Coca Cola offers a milk-based shake through its Core Power brand. From established players like Muscle Milk to newer products from brands like Organic Valley and NesQuik, the protein-enhanced sports drinks are arguably bigger than ever before. 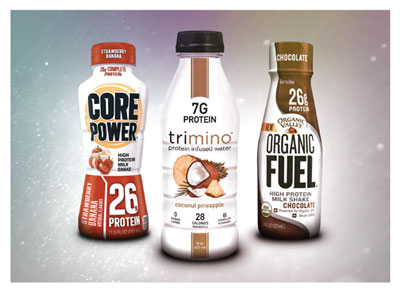 But in a twist, the proliferation of such protein-based products may have also shifted the manner in which consumers interpret the ingredient. As protein has become a more ubiquitous presence in a variety of beverages, its use occasions have expanded beyond just exercise and post-workout recovery.

Case-in-point: Trimino Protein Water. Bob Leary, founder, chairman and CMO of Trimino Brands, explained that he developed the product, a fruit-flavored water with 28 calories and infused with 7 grams of protein per 16 oz bottle, after watching his kids guzzle down sugary sports drinks during physical activity. Yet in an interview with BevNET, he explained that, in presenting the drink to the marketplace, the brand has deliberately steered away from defining it as another sports drink.

“Our goal was not to make a sports drink, but to make a drink for the mainstream market,” said Leary. “We made a conscious decision to stay away from any parallels [with sports or energy drinks]. However, when you look at our formulation, you get a natural energy boost from the protein and vitamin B, but we are not an energy drink. The way I put it is we kind of colored outside the lines with this product. We didn’t want to be pigeonholed in any of the traditional categories.”

That approach has its share of risks, however. Leary includes diabetics and post-surgery patients alongside millennials and busy moms as part of the brand’s consumer base, but in broadening the use occasions for Trimino outside of sports and exercise, there is the potential for losing one of the sports drink categories biggest assets: a strong, clear brand identity.

“It is absolutely a double-edged sword,” Leary said of playing in the grey areas between categories. “We focus on protein. That’s our key differentiator. Then we allow that to be a springboard in whatever direction people want to take it.” 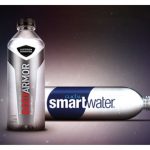 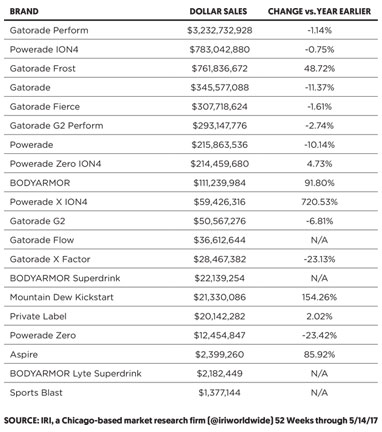 When it comes to hydration, it’s tough to beat the original. One of the core tenants of the sports drink category is its ability to provide superior hydration relative to water, but the rapid growth of performance-oriented enhanced waters threatens to turn that established notion on its ear.

According to statistics from market analytics firm Allied Market Research, the U.S. premium water market is worth around $2.8 billion. Glaceau’s smartwater, one of the early pioneers in enhanced water, remains a major force with a 7.6 percent share of the bottled water market, but the category continues to add more brands offering a broader range of health and functional benefits, including alkalinity, electrolytes, vitamins and probiotics.

Other brands have launched performance-oriented water lines designed to complement sports drinks rather than replace them. BodyArmor solidified its position as a broad, athletic performance-based brand platform with last year’s release of SuperWater, an electrolyte enhanced water featuring “sport performance pH” that company co-founder and chairman Mike Repole called a “game-changer for athletes” in an interview with BevNET last November.

Yet for serious athletes, premium waters may not be quite ready to replace isotonic sports drinks. According to the American College of Sports Medicine, drinking carbohydrate beverages during exercise lasting for 60 minutes or longer significantly boosts endurance compared to drinking water, with some studies showing a 20 percent or more improvement in endurance in workouts lasting over 90 minutes.

The rise of a versatile, multi-functional range of beverage products that can play on the same field as traditional sports drinks is exciting for industry observers to watch, but they still have a lot of ground to make up on Gatorade and the other isotonic options that are still thriving. As they operate from an advantaged position, some isotonic brands are hoping they can stay ahead of the curve by refining rather than revolutionizing the category. 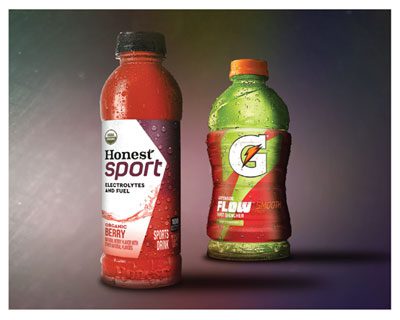 Seth Goldman is betting big on that idea. Honest, a subsidiary of The Coca-Cola Company, relaunched its Sport line in February following a brand revamp, offering the same electrolytes and sugar-based carbohydrates of a traditional isotonic sports drink but with the key difference of a clean organic ingredient profile. Goldman developed Honest Sport as a means of connecting with the demands of both fitness enthusiasts and consumers seeking clean label products, as well as an opportunity to expand Coke’s portfolio of organic beverages.

By taking the tried and true functional aspects of isotonic sports drinks and giving them a new on-trend presentation, Honest Sport aims to play in more than one field.

“Everyone sees all the trends towards health and wellness, so when you can connect hydration directly to a health and wellness occasion, which exercise and fitness are, than you are connecting exactly where people are moving and people are looking for,” he said in an interview with BevNET.

Honest is not the first sports drink brand to recognize this shift in the marketplace. Gatorade has made two unsuccessful attempts to tap into consumer demand for organic products, having tried as recently as last fall with the launch of the stevia-sweetened G Organic. Goldman, however, remains confident that Honest will succeed because the brand can offer something that Gatorade cannot: real credibility with both consumers and retailers in the natural channel.

“There really hasn’t been a brand that’s been presented as a sports drink for [the natural channel],” he explained. “You don’t see the usual players there, and I would contend that’s not because consumers in that channel don’t drink sports drinks, it’s because they haven’t had a brand that resonates with that channel available to them.”

Moving on from the now-defunct G Organic, Gatorade is still looking to evolve its core formula and branding in the face of shifting consumer attitudes towards sports drinks. In April, the company launched its fourth sub-line, Flow, which is described as providing “full flavor with a smooth finish.”

Will upstart, disruptive alternatives eventually take a larger piece of the sports drink market? Time will tell, but the race is officially on.