Caffeine may be the world’s most widely used drug, but unless you’re a black coffee fanatic the beverages with the most kick to them typically aren’t the healthiest options on the shelf. Sugar, artificial sweeteners, obscure chemicals – no matter which way you cut it, many of the most energizing shots and ready-to-drinks on the market contain dealbreakers for the health-minded consumer.

As the functional energy shot category has grown throughout the years it has at times struggled to adapt to these demands. But now, a new wave of entrepreneurs has rolled out several shots and mixing formats throughout the last year that strip away the guarana, taurine, and chemicals to bring energy back to its base elements.

Although many are still young, it’s worth asking if these brands could represent the evolution of energization to a place where athletes, students, and general caffeine heads can sleep a little easier at night knowing their morning wake-me-up and afternoon kicker are within their control and working for them.

Stirring stick brand PureLYFT and cocktail mixer Hackamore each have unique approaches to the same idea: safely caffeinating any beverage of your choosing.

PureLYFT, produced by the New Jersey-based Pure Mix LLC, offers a line of “clean caffeine” plastic stirring sticks. Consumers either pop a cap or peel off a sticker covering on the disposable sticks to reveal a powdered caffeine made from green coffee beans along with stevia and vitamins A and B. A single stick has 125mg of caffeine.

“We tried to strip out everything in the traditional beverages that is synthetic and linked to the negativity of energy drinks,” said PureLYFT co-founder and CEO Erik Elfstrum. “We know that consumers are looking for healthier options and they want the functionality of energy.”

According to Elfstrum, a former district business manager for Pfizer, college students were the go-to demographic to target at launch. The company signed a deal to distribute in Barnes & Noble bookstores as a way to get the caffeine sticks onto college campuses. Since then PureLYFT has moved into the convenience channel and expanded its college campus presence by partnering with Aramark. Currently the brand is in more than 1,000 stores in the U.S.

Most recently, PureLYFT launched flavored varieties with Lemon Lime, Mixed Berry, and Orange varieties in addition to its original.

“When we were pitching the college campuses, a lot of them have removed the traditional energy drinks,” Elfstrum said. “Whether it’s parents who are worried their kids are over-consuming them, or just wanting to provide healthier options for students. We feel like the timing is perfect.”

While PureLYFT may have worked it’s way onto campuses, Hackamore “Premium Energy” is coming out of one. 22-year-old entrepreneur Olivia Robinson, an advertising and marketing student, came up with the idea for Hackamore two years ago and finally launched in New York in Q4 of 2016.

According to Robinson, Hackamore is not a traditional mixer. Instead, the brand is being marketed as the first energy drink that comes in a liter bottle, similar in look to premium vodkas. Featuring a lime flavor, Hackamore can stand on its own, although it’s served as a shot with 80mg of caffeine per 2 oz. However, the drink is at its most versatile as a cocktail mixer, and getting the brand into New York City bars is currently Robinson’s focus, suggesting bar managers charge patrons about $3 to add “a shot of energy” to their drinks.

“It’s the first energy drink that really caters to the mixology world,” Robinson said. “The fact that it’s served as a shot means mixologists can add this to any cocktail or mocktail without diluting the drink. It can mix well with any kind of liquor, there’s really no limit.”

Hackamore retails at $26.99 per bottle, or $60 for a case of six bottles wholesale. It is currently selling online but not yet in retail stores. 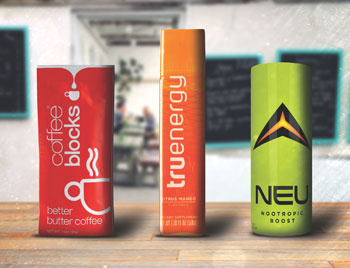 As a hockey player, Jack McNamara spent a lot of time in locker rooms checking out the energy “supplements” his teammates would use to pump up before a big game. SoBe, Red Bull, 5-hour Energy, they all had their heydays as pro athletes favorite pre-gamer. But McNamara was never completely sold on their efficacy.

“When I took a look at a lot of these products it astonished me how an athlete would train six or seven days a week, then be on a vegan diet, paleo diet, plant based diet,” McNamara said. “Then when they actually go to the rink to perform they were putting all this artificial crap in their body.”

Now retired from sports, McNamara is the founder of TruEnergy, a new energy shot that holds back on excessive amounts of vitamins and instead provides 100mg of caffeine sourced from green tea and green coffee beans. Rather than give the consumer a large dose of B vitamins like many other sports shots, TruEnergy contains no more than 100 percent the daily dosage of any of its ingredients. Currently only sold in Citrus Mango flavor, with a pomegranate variety on the way, McNamara said he hopes the shot will become the go-to healthy alternative to 5-hour Energy and has already brought on unpaid endorsements from pro NHL and NFL athletes.

“I literally looked at every single thing 5-hour Energy did and tried to do it different,” McNamara said. “Our bottle design is transparent. It is extremely unique, even our displays are unique.”

While TruEnergy is looking to become the energy shot of athletes, Neu Nootropic Boost is promising brain power with its new shot. Similarly founded by a newcomer to the beverage industry, CEO Salim Sweiss developed the formula and product plan during a lengthy recovery from a motorcycle accident.

According to Sweiss, nootropics, sometimes called “smart drugs,” trigger an alert feeling without the overdrive brought on by caffeine. Neu itself contains high amounts of B vitamins and vitamin D along with 125mg of caffeine. The buzz is cool, calm, and sustained throughout the day, but won’t disrupt sleep schedules, Sweiss said.

“It’s a different feel from coffee, you have more control, more focus,” Sweiss said. “The energy drink market is purely driven on caffeine and caffeine alone and high amounts of it. Caffeine is great, but it does one thing well – it releases adrenaline in your system. Adrenaline is the same hormone when you’re in a fight or flight information and it’s just pure raw energy, it’s not controllable.”

Currently Neu retails at $3.99 per 2 oz. shot. Neu self-distributes to about 50 retail stores in the San Francisco bay area and also sells online through Amazon and Wal-Mart. TruEnergy currently retails for $2.99 per 1.69 oz. shot.

RETURN OF THE FAT

While brands are still working to educate the public its health benefits, saturated fat has ceased to be the health boogeyman it once was. Food and beverage producers are finding ways to rebrand the term as one exemplifying health and energy. Take Bulletproof FATwater for instance, which has taken great strides to turn “fat” into gym vocabulary, instead of couch potato terminology.

Los Angeles-based Coffee Blocks is continuing down that path of combining fat with energy. Since launching over a year ago, the instant “butter coffee” mixer has marked its territory as an alternative to the sugar and cream routine of most coffee drinkers, one particularly suited for fat positive practitioners of the paleo and ketogenic diets. Formerly a frozen product, the brand recently relaunched as a shelf-stable gel mixer so consumers could take the product on the go, only needing to add hot water.

“A lot of time people are adding sugars to their coffee, or they’re having doughnuts, or bagels, or cereals for breakfast and those are all high carbs,” said co-founder Tom Meredith. “This is really geared toward people who are trying to remove carbs from their diet, so that is why we use grass-fed butter and organic coconut oil.”

An individual 1.1 oz. packet of Coffee Blocks retails for $2.99, with 8-packs selling for $23.95. According to Meredith, the company also plans to launch a “Fat Tea” with the aid of funding from Kickstarter and, eventually, new roasts of coffee.

While Meredith admits he may be biased, fat and energy has potential to expand into the mainstream as more consumers abandon sugar in pursuit of a healthier lifestyle.

“Sometimes I wonder if I’m in this little fat echo chamber, but it seems like it’s growing quite a bit,” Meredith said. “I see eventually it becoming more mainstream. It’s just a lot of different people pushing in different areas toward that.”