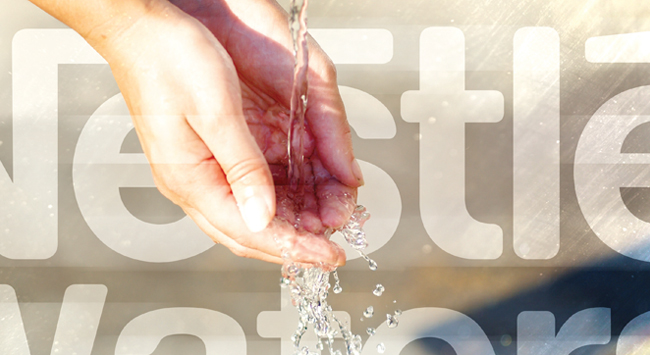 According to research firm Beverage Marketing Corp., Americans’ consumption of bottled water outpaced carbonated soft drinks for the first time ever in 2016. And in the list of major brands driving that surge in sales, Nestlé Waters portfolio was at the top.

Over the course of several decades, the Swiss-based food and beverage conglomerate has made bottled water a centerpiece of its product portfolio, with much success. In 2016, according to its annual report, sales of Nestlé water products across its 52 brands in the category hit $7.4 billion. Nestlé’s range of offerings — which includes Nestlé Pure Life, Perrier, San Pellegrino, plus six regional brands across the country — gives the company means to compete across multiple fronts.

Yet in its position as one of the leading brands in the $22 billion-plus-and-growing U.S. bottled water category, Nestlé Waters enjoys both unique advantages and challenges. The company experienced soft growth in the last quarter of 2017, with Nestle CEO Mark Schneider admitting it had been “slow to react to the rise of carbonated waters” in an earnings call in February.

Facing increased competition from across the beverage spectrum, the company’s corporate leadership is tasked with the mission of continuing to shape and adapt its corporate strategy to spur commercial growth, while also attempting to address profound and politically sensitive questions about environmental sustainability and plastic waste reduction. What it ultimately does is going to have important ramifications across the category; BevNET looked at the ways it is navigating the line between leadership and stewardship.

RIDING THE WAVE IN A CHANGING CONSUMER MARKETPLACE

The recent journey of Nestle’s biggest water brand, Pure Life, is indicative of the way that even one of the world’s largest water companies must still be responsive to consumers’ evolving demands around bottled water products.

With close to $1 billion in sales in 2017, the Pure Life line stands as the company’s flagship bottled water product across all markets. But the brand is facing pressure from the continued strong growth of private label waters — the same low priced alternative that Pure Life tends to offer. According to data from market research group IRI, U.S. multi-outlet (MULO) sales of private label bottled water are up 6.8 percent since last January, reaching $2.6 billion. Over that same period, Pure Life sales declined 3.7 percent to $881 million, behind both Aquafina and Dasani, the leading brands owned by PepsiCo and Coke, respectively.

Some of that decline may be due to the broadening of the category. The rise of function-based premium waters, for example, has also impacted the mainstream bottled water market, as brands in the category look to either add functional ingredients to their products or find new and exotic sources — such as volcanic, deep ocean and even controversial ‘raw’ water — that have natural benefits. In the past year, the sub-category, created and still led by Smartwater ($821 million in 2017 U.S. MULO sales), has seen a new entrant in PepsiCo’s LIFE WTR brand ($167 million in first year sales) and the continued rise of brands like Essentia and CORE, which saw 60 percent growth in sales last year. 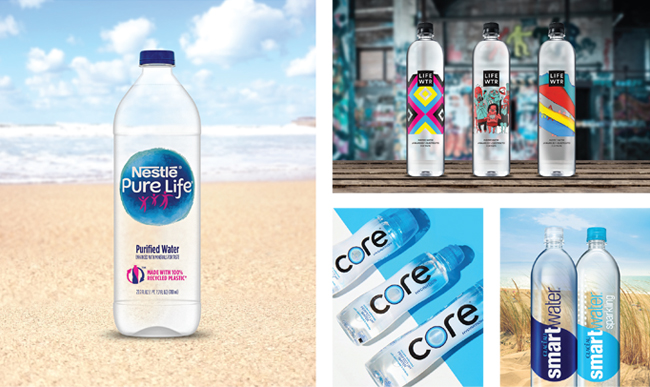 Nevertheless, Andrius Dapkus, vice president and general manager for Nestlé Waters North America, said the work other brands have done to elevate the importance of sourcing has had a positive effect. And as consumers pay closer attention to how and from where the water they are drinking gets into the bottle, it provides an opening for Nestle to communicate its environmental commitment.

“In the U.S., I do think consumers are becoming a little bit more discerning,” he said. “Source does matter to them. And for many of them, they are looking at identifying new and unique sources and I think it’s good for the category, good for our regional spring water brands because ultimately, as consumers become more discerning, that’s when brand power and equity can become part of the decision making process.”

Dapkus added: “True functionality born out of what’s present in the water, or if it’s just in the spirit of taste derived from where the water comes from, I do think people are asking more what’s in the water versus what’s not in the water.”

Nestlé recently announced it was/recently completed rebranding of its top-selling Pure Life brand; it’s an example of the kind of delicate road a water brand drives when it takes a common liquid and sheathes it in plastic. Consumers demand convenience, but a lessening of environmental impact in bringing them that convenience is also paramount.

For the marketing campaign to support the rebrand, Nestle is seeking to strike an aspirational tone that emphasizes the company’s progressive attitude towards environmental issues. Since last August, all Nestle bottled water products also now carry a standardized How2Recycle instruction label to better communicate recyclability information on package to consumers.

While Nestlé has committed considerable resources towards reducing the environmental impact of its PET bottles, the company has faced criticism over its impact in the communities where it sources its water.

As the largest owner of private water sources in the state, Nestlé has long been the focus of media attention in Michigan, and even more so in the wake of the 2014 water crisis in Flint, in which local government officials, in a move aimed at reducing costs, switched the city’s water supply from Detroit to the polluted Flint River.

The optics of Flint residents paying some of the highest rates in the U.S. for access to undrinkable water while Nestlé extracts 150 gallons of water per minute from a nearby underground aquifer— at a cost of just $200 per year — were hardly flattering. Environmental activists have formed pockets of resistance across the state; In Osceola Township, population 900, local officials are appealing a judge’s decision allowing Nestlé to build a pumping booster station that will allow it to increase output from the county well from 250 gallons to 450 gallons per minute. Meanwhile, in the state legislature, representatives are debating a proposed bill that if approved would ease requirements in the review process for large quantity groundwater withdrawals, or more than 100,000 gallons per day.

Nestlé has moved to defend its record in Michigan, emphasizing that it does not and has never drawn from the watershed in Flint. Through the Ice Mountain Environmental Stewardship fund, the company has pledged over $500,000 to conservation, enhancement, and restoration projects in the Muskegon River watershed. Nestlé has also pledged 1.5 million bottles of water to Flint public schools, as well as several hundred thousand more to community organizations, fire departments and food banks in Michigan.

As part of a broader industry response to the Flint crisis, Nestlé Waters joined with The Coca-Cola Company, the PepsiCo Foundation and the Walmart Foundation last February to fund an recycling education and awareness program, via non-profit group Keep America Beautiful, for the 10,000 public school students in the city affected by the contamination.

“We have a lot of efforts underway right now in the state of Michigan to bring our message forward about the efforts we are undertaking to ensure long-term availability and sustainability of water,” said Dapkus.

Nestlé has also faced challenges in its long-term efforts to shift its bottled water products from virgin to recycled polyethylene terephthalate (PET) packaging, though progress is being made. The company has reduced the amount of PET in its half-liter bottles by 40 percent since 2005, and, in February, Nestlé Pure life launched a 700ml bottle made from 100 percent food grade recycled PET (rPET).

Dapkus, however, pointed out that for Nestlé’s goal of using rPET in all its bottles requires overall levels of recycling in the U.S. to grow at a faster rate than is currently happening. The lack of access to recycled material, coupled with domestic overcapacity and low prices in the PET resin market, weaken the motivation for companies to make strong commitments to using rPET.

“I think the biggest choke point right now is in the available supply of rPET,” said Dapkus. “The amount of bottles actually being recycled is not high enough that would allow the product to flow through the system and make available on the back end food grade, Nestlé quality PET.”

As a result, Nestlé has ample motivation to invest further in building out the rPET ecosystem. In May, the company made a $6 million investment in the Closed Loop Fund, a $100 million social impact investment fund that provides municipalities with access to capital for projects aimed at improving recycling programs.

While Nestlé has made a commitment to using PET, the company hasn’t abandoned its search for viable alternatives. Dapkus said Nestlé has also directed financial support towards innovative projects at companies such as California-based CarbonLite Industries, one of the country’s largest producers of post-consumer rPET, and Origin Materials.

“We have a partnership with Origin, which is going to develop with us, at an industrial scale, the next generation of 100 percent bioplastic, made entirely from non-food-based materials,” Dapkus said.

This new material is made from renewable sources, which includes used cardboard and sawdust, that do not divert resources from human agriculture or animal food consumption. The company aims to achieve commercial scale production capacity for a 75 percent bio-based PET bottle as early as 2020, increasing to 95 percent in 2022, with the goal of eventually achieving 100 percent. “It will be the first PET molecule made 100 percent from non-oil, non-recycled material,” Dapkus said.

The limited supply of rPET available on the market has constrained Nestlé’s work to integrate new packaging across all its water lines. With the exception of Arrowhead and Nestlé Pure Life products in the California market, which utilize 50 percent rPET in its bottles, Dapkus said there is not a sufficient supply of rPET available to communicate it to consumers in a significant way.

“For consumers, 50 percent is OK, but they are really looking for 100 percent,” he said. “So until we can get a large enough supply of rPET to be able to fulfill the demand from a supply perspective on a full-scale business in sparkling, it’s going to be difficult for us to extend that.”

In effect, much of the idea behind Nestlé’s promotion and positioning of its full rPET bottles is aimed as much at increasing consumer awareness about long-term, macro-level recycling efforts as it is getting them to purchase the actual product. Gauging whether the rPET format gives Nestlé the “platform to start communicating with consumers about the importance of recycling” as Dapkus hopes will likely not be possible until months and years from now.

At the end of the day, it may be the story behind the liquid in the bottle that determines how consumers choose to spend their dollars in this category. But it’s also important to erect signposts that show that you’re staying with the consumer; it’s Nestle’s ability to successfully integrate those signposts into its messaging that will determine its ability to effectively resonate with its increasingly environmentally conscious customer base.

“There’s not one overarching driver in the behavior of the category, but then you look at the ecosystem of product benefit from a functional and emotional standpoint, this is one of the elements that factors in to the considerations for consumers,” Dapkus said. “It’s importance in the overall equation is growing.” 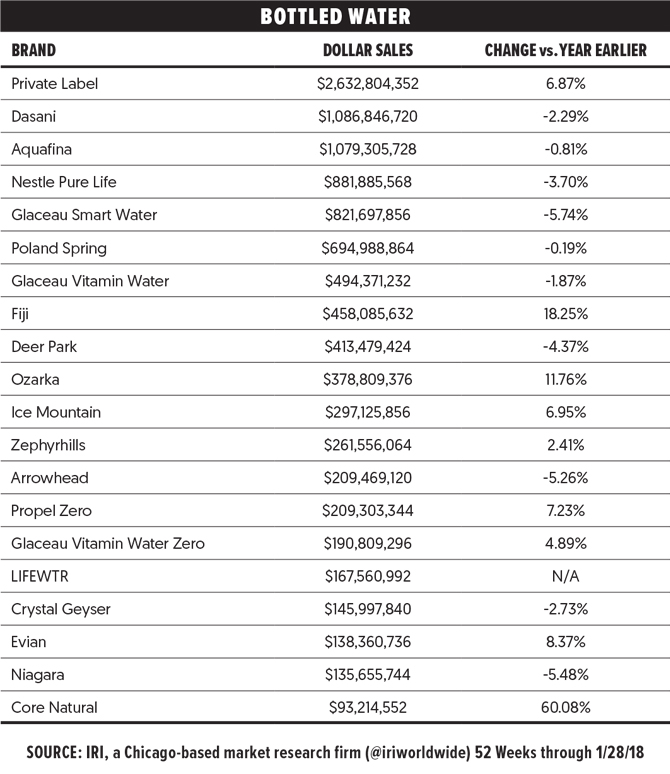