Energy drinks are heading into the future riding a healthy buzz.

Across the category, there’s reason for optimism. According to a May 2017 report by market research group Mintel, U.S. energy drink and energy shot sales grew 5.8 percent in 2016, with still more room for growth. Analysts from Mintel forecast U.S. energy drink sales to rise 47 percent from 2016-2021, reaching a projected $19.2 billion.

Energy drinks also enjoy strong traction with several key demographics; according to the Mintel report, males 18-35 and Hispanics have deep engagement with the category, while millennial consumers over index for regular usage of energy drinks. Furthermore, over the next decade, trends indicate that energy drinks will continue growing as millennials and Hispanics comprise a larger share of the American population.

Yet even with such commercial momentum behind them, energy drink manufacturers are not exempt from the larger forces shaping the beverage industry as a whole. Consumer demand for products that contain less sugar and are made with natural ingredients is rising, as is interest in drinks that can offer different functional benefits than typically seen in energy products. From legacy brands to startups, energy drinks are in the midst of an evolution that is set to redefine the category in the coming years.

The impact of rising consumer demand for natural, better-for-you products has been felt across a range of beverage categories. In energy drinks, that change may be more drastic than in others.

In its May 2017 executive summary on energy drinks, analysts from Mintel wrote: “In a context where consumers are concerned with weight gain and overall health, the high sugar content, synthetically sourced caffeine, artificial ingredients and additives associated with traditional energy drinks pose a challenge to some traditional suppliers. This may lead some consumers to cut back on energy drink consumption and lead other potential users to seek more natural products, associated with less sugar and artificial ingredients.”

Though the market for natural energy remains less than one percent of the total category – around $64.9 million annually, compared to approximately $10.8 billion for conventional – it is growing at a much faster rate.

According to data from SPINS, year-over-year growth for natural energy is 16.2 percent, while conventional growth remains flat at around 1.8 percent.

“We expect natural energy drinks to make a greater dent in this category as distribution picks up in the coming years and consumers’ growing preferences for clean food and beverage options disrupt even the most established legacy brands’ sales trajectory, such as we’ve seen happen in the soft drink segment,” wrote Jake Knepper, Product Library Solutions Manager at SPINS, in an email.

Natural energy aside, calories remain a concern. Over the past year, Red Bull has responded to shifts in consumer attitudes towards energy drinks by expanding its range of sugar-free SKUs, after internal company research noted strong growth for low-calorie drinks. Sales of Red Bull’s sugar-free energy drinks were up slightly to around $727 million in a 52-week period ending on January 28, 2018. “We also see overall beverage trends reflected in the energy drink category,” wrote the Red Bull Insights Team, in response to written questions. “Consumers are are showing interest in flavors, sugar-free/diet/zero offerings and natural and organic versions.”

Investors have also shown interest in the category, none as much as Anheuser-Busch InBev. The beer conglomerate purchased organic energy drink brand Hiball for an undisclosed fee last year, a move that founder and CEO Todd Berardi said has added to the momentum behind natural energy drinks.

“Since our acquisition, there’s been a raising of the bar towards where the trends are going, where everybody is trying to move their product that may not have had those attributes since the beginning,” he said. “I think an acquisition by Anheuser-Busch obviously validated not only that we were the leading brand but also validates where the trends are going, and it’s happening at a more rapid clip now.”

As part of the shift towards healthier beverages, future energy drinks may even look to emphasize a different kind of functionality than previously seen in the category.

“We are also seeing a big pick up in nootropic, mood, clarity and brain function-focused energy drinks, many based on adaptogens,” said Knepper. “Energy drink formulations are moving toward a more holistic, centering, mental performance type of beverage – a beverage to boost not just energy levels but something to boost one’s overall sense of wellness and optimized function.”

MatchaBar, a Brooklyn-based maker of ready-to-drink matcha tea products, has built its brand around the edges of the energy drink category; its 10 oz. bottled product even includes the call out of “better energy” on the label. Speaking with BevNET, co-founder Graham Fortgang explained that MatchaBar’s summer launch of its new energy drink, called Hustle, is an attempt to position matcha as “a modern day healthy alternative to taurine.” More specifically, he sees the potential for L-theanine – a slow release amino acid found in matcha that acts as a natural calming agent – to appeal to consumers looking for a more fine-tuned energy experience.

“On the back of every bottle it says: “L-theanine keeps you calm and focused as you are getting stuff done,” he said. “I think as we move into the next five years, [the category] will be moving away form the harder, better, faster, stronger of yesterday and more into the dialed-in performance of tomorrow.”

Fitness-related energy drinks, such as FitAid and Celsius, also offer unique types of functionality in the guise of a traditional energy drink. The latter, which claims to help users boost their metabolism and burn more calories, grew by just over 40 percent in MULO sales in the past year after closing a $15 million investment round led by Hong Kong-based Horizon Ventures in March 2017.

The movement towards lower-sugar products may also affect the energy drink market in unexpected ways.

Whether they are moving to an all-natural formulation or showcasing different kinds of functional benefits, energy drinks are motivated to make changes by the desire to reach the same young, well-off consumers that are driving the shift towards better-for-you food and beverage products of all types.

“I think the demographic for energy drinks has changed in recent years, possibly driven by younger, more affluent consumers who grew up in a world where clean food and a product diversity always existed,” Knepper wrote in response to a question about the changing face of the modern energy drink consumer. “I believe we’re seeing energy drinks being formulated for the office – again, not just a burst of energy but a formula-driven nootropic focused on a balanced elevation of energy levels.”

At 25 and 28 respectively, MatchaBar co-founders and brothers Graham and Max Fortgang are ideally suited to understand what young consumers want out of a modern energy drink. Using the tag line “Good things come to those that hustle,” the Brooklyn-based brand, which operates matcha cafes in New York and Los Angeles, has ingrained itself with youth culture, welcoming rap superstar Drake as an investor in August 2017 and landing on the menu at Coachella Valley Music and Arts Festival last month.

In creating Hustle, Graham Fortgang said the idea was hone in on matcha as the preferred source of energy for the modern young millennial.

“It plays into everything from the person trying to start their own business but also calls into everyone else who’s working a 9 to 5 and hustling to get done what they need to get done throughout the day,” he said. “Everything we’ve done with this product is creating an experience behind it and really owning that idea of ‘the hustle’ rather than focusing too much on the actual product itself.”

Even as the overall channel reported relatively flat growth of 0.1 percent, according to Nielsen data reported by Wells Fargo Securities, energy drinks saw a 3.3 percent increase in sales during a 12-week period ending on April 21. Yet in order to reach the types of consumers Fortgang is talking about, energy drink brands may need to balance their presence in C-stores and conventional channels where the category has traditionally thrived. 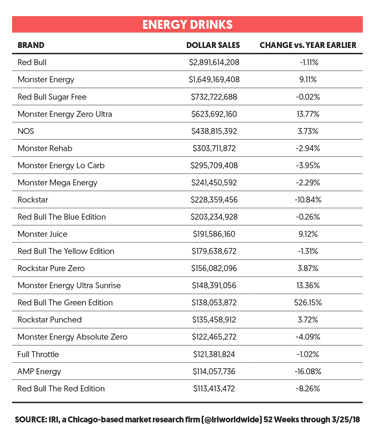