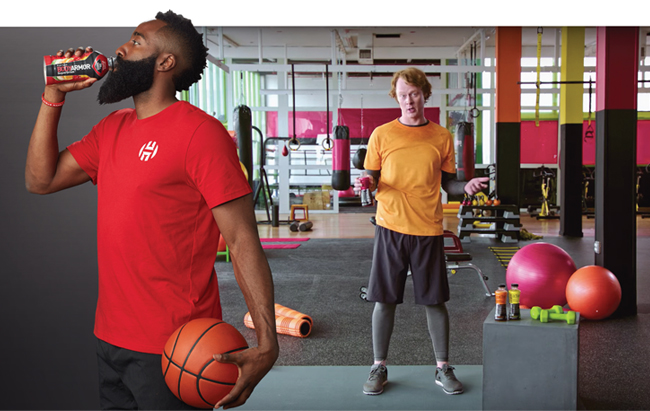 If any beverage category loves its stars, it’s sports drinks.

Whether it’s trying to shoot like Jordan or swing like Jeter, sports drink makers have always sought to link their products to the performances of some of the biggest names in professional sports. Yet much has changed in recent years: consumer preferences across beverage categories have shifted away from sports drinks made with artificial colors and added sugars, while star athletes have become more accessible than ever thanks to social media. In steering their respective brands through the modern marketing landscape, better-for-you sports drinks BodyArmor, an independent brand, and vitamin water active, released by The Coca-Cola Company, are taking two distinct approaches to showcasing athletes as part of their 2018 campaigns. Meanwhile, upstart brands are harnessing non-traditional advertising to reach and influence consumers without a multi-million dollar marketing budget.

As BodyArmor positions itself as a better-for-you alternative and a credible rival for the sports drink category’s dominant players Gatorade and Powerade, it is also looking to evolve how athletes are incorporated into product marketing with a next-generation approach.

For its most recent campaign earlier this spring, the brand handed over creative control to perhaps its most famous spokesperson and investor: former NBA MVP and five-time champion Kobe Bryant. The Lakers legend joined the company as its third-largest shareholder, behind co-founders Lance Collins and Mike Repole, in 2014, and has been featured himself in BodyArmor ads. Bryant conceptualized, co-directed and wrote four television commercials for the new “Thanks…” campaign, featuring some of the brand’s top ambassadors including Kristaps Porzingas, Mike Trout, Skylar Diggins-Smith and Houston Rockets guard James Harden, who won the 2018 NBA Most Valuable Player award in June.

“The number one thing we do as a company is we are listening to the athletes,” said Repole, chairman of BodyArmor, in a call with BevNET. “This year’s campaign was a little bit more mainstream marketing where we are just kind of connecting with consumers who have left the category because they’ve grown out of it but are now coming back to it with BodyArmor.”

In contrast to last year’s marketing effort, which featured a series of black-and-white commercials built around the tagline of “Obsession is Natural,” the new campaign takes a lighter, more humorous tone. Honing in on the concept of BodyArmor as the progressive alternative to outdated sports drinks, the TV spots feature the likes of Harden, Trout and company seemingly stuck in different eras; Harden, for example, walks from the locker room to the court in full colonial-era garb, escorted by a marching drummer. “James Harden wouldn’t go to the game wearing outdated fashion,” the voiceover states. “So why would he choose an outdated sports drink?” The Rockets star then turns the camera and answers dryly, “I wouldn’t.”

In an email to BevNET, Harden said that that he spoke with Bryant about the ads before the shoot and called the experience of working with the former Lakers star on-set “unforgettable.” As BodyArmor looks to give consumers long who are long accustomed to seeing athletes hawk sports drinks something different, the advantage of having someone on the creative team who has been the subject of campaigns himself — like Bryant — has helped the company’s marketing department approach the space with a unique perspective.

“I didn’t know five years ago I was going to have an Oscar winner doing my creative,” Repole said, calling Bryant “the most creative person I’ve ever met.” His personal rapport with fellow NBA players Porzingas and Harden, Fedele said, has helped Bryant guide them through the concept for the ads early on in the creative process. Meanwhile, his respect among young athletes helps keep BodyArmor in tune with what consumers are looking for in a sports drink, according to Repole. “At the end of the day, we have a front line to the minds of athletes,” he said. “This isn’t a focus group; this is real information that we are getting in real time.”

With the support of its athlete partners, BodyArmor has directed its messaging to both traditional and non-traditional marketing channels. The TV ads were played throughout broadcasts during the 2018 NBA Playoffs, with an increased presence during games featuring Harden’s Houston Rockets as they advanced to the Western Conference Finals. Michael Fedele, vice president of marketing at BodyArmor, called the campaign a “true 360 effort” that included significant investment in social media and digital ads on sites like ESPN, Bleacher Report, Complex and Barstool Sports.

As it looks to stay ahead of the curve, BodyArmor has also inked sponsorship deals with competitions such as the Ultimate Fighting Championship (UFC), the CONCACAF Gold Cup and Spartan Race in recent years. It also sponsored the Floyd Mayweather Jr. vs. Connor McGregor fight last August, which had the second highest pay-per-view buy rate in U.S. history. The brand has also brought in rising stars from within these markets, such as UFC fighter Cody Garbrandt and snowboarder Maddie Mastro, to complement their roster of established names.

In recent years, BodyArmor has seen its strategic approach yield significant market gains. According to IRI, the brand had multi-outlet plus c-store sales of over $197 million as of March, a year-over-year increase of approximately 75 percent. Though still a far cry from Gatorade’s nearly $3 billion in sales, the brand has gained category share and is still expanding; a recent Wells Fargo Securities report on all-channel data from Nielsen noted BodyArmor was up 104 percent over a 4-week period ending on June 16.

Perhaps most notably, BodyArmor’s marketing initiatives haven’t backed away from the company’s stated ambition of disrupting the Gatorade/Powerade hegemony in sports drinks. The Bryant-directed TV spots end with a sarcastic quip on the voiceover: “Thanks Gatorade — we’ll take it from here.”

Rather than going head-to-head with the category’s big guns, Vitamin Water has eschewed high-profile athletes and cutting edge sports in favor of something slightly less intimidating for its sports drink line Active, which launched earlier this year.

His name is the “Semi-Fit Spokesguy,” and he’s unlikely to be confused with anyone on BodyArmor’s roster anytime soon. As he appears in the campaign created by California-based agency Zambezi, he’s the red-haired, occasionally sweaty face of a campaign that is aimed at making sports drinks, and fitness in general, more approachable to the average consumer.

“With this campaign, we wanted to show people that working out can be a part of your life but shouldn’t be your life,” wrote Alex Ames, senior manager IMC at the Coca-Cola Company. “When looking for a person who embodied our vision of ‘the rest of us,’ ‘Sorta-fit Guy” really fit the bill.”

Within the portfolio of Glaceau brands, the campaign has helped the Active line find the space to establish a marketing identity of its own that is distinct from the core Vitamin Water line and Smartwater, which uses lifestyle-focused ads featuring actors like Jennifer Aniston and Aaron Paul. Active, which contains natural electrolytes from coconut water and sea salt and is sweetened with cane sugar, launched initially at 7-Eleven and select Target locations late last year. The SKU names – Pump It, Work It and Move It – echo the brand’s sense of humor.

The commercials match that tone; at the end of one TV spot, the “Sorta-fit Guy” admits offhand, “Sometimes when I go to the gym and I can’t find parking, I’ll go home.”

“The sports drink category has traditionally focused on athletes who are on top of their game and in excellent physical shape – those who we’re ‘supposed’ to aspire to be,” Ames wrote. “However, that demographic doesn’t speak to most ordinary, fitness-minded individuals.”

While BodyArmor has the benefit of pairing its marketing efforts around events with high consumer engagement, like the NBA Playoffs, Vitamin Water is focusing its “Sorta-fit Guy” campaign in a select number of key markets, including Los Angeles, New York City, Atlanta, Phoenix, Denver and Washington, D.C. Out-of-home and point-of-sale ads have been placed near gyms, parks and running paths “to remind people of the fun side of fitness while they’re working out,” according to Ames. These will be supplemented with a national sampling activation tour throughout the summer.

For sports brands outside of the Gatorade-Powerade-BodyArmor triumvirate, taking advantage of marketing opportunities and partnerships in non-traditional channels is a crucial tactic for reaching consumers. Recently, two brands have found ways to attach their products to some of this summer’s biggest Hollywood hits.

Trimino enjoyed a notable role in “Super Troopers 2,” featuring prominently in one scene and having its logo appear in the background of shots throughout the movie. As part of his investment, the film’s cast filmed three Trimino commercial spots which were released online around the movie’s April 20 release date. During its domestic run, Super Troopers 2 played on over 2,000 screens and earned over $30 million at the U.S. box office, more than double its $13.5 million budget.

“When somebody asked me if I wanted to invest in it, I couldn’t turn Super Troopers down,” Leary told BevNET earlier this year. “Any opportunity that I get when I’m investing in a movie to get Trimino product placement, I jump on it.”

Roar Organic has also enjoyed a raised profile thanks to its association with a film franchise. Over the past year, the brand launched several SKUs in its kids line featuring Marvel Comics characters like Captain America, Spider-Man and Iron Man on the package, as well as a Target-exclusive launch for its Black Cherry flavor that showcases Black Panther. Those characters were prominently featured in two of the year’s biggest hit films, Avengers: Infinity War and Black Panther, each of which grossed over $1 billion at the box office worldwide.