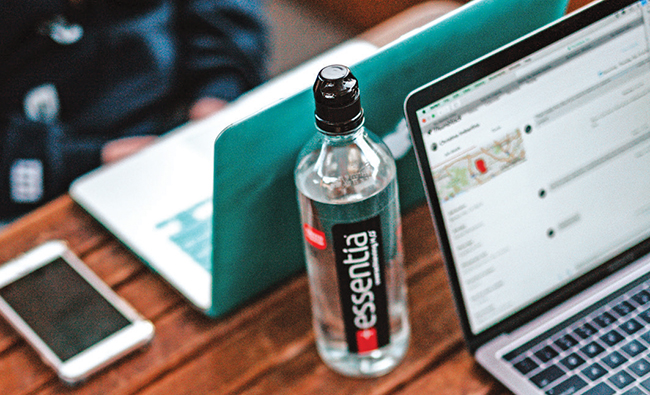 A couple of years ago a friend at Essentia Water handed me a wad of retail coupons for free product that became my ticket to getting into the market research business. When I’d see somebody contentedly drinking a bottle of the 9.5 pH ionized water – whether a fashionably attired millennial in a Whole Foods café or a working-class type on the subway in the farther reaches of Brooklyn – I’d approach them with the offer of a freebie. That gave me a moment to try to plumb their allegiance to the Seattle-based brand that’s been the star of the “functional” water segment. So what did I learn in the course of dispensing a couple dozen of the coupons to this diverse array of users? I’d boil it down to two core insights:

2 – Not a single one could articulate to me how specifically that water makes them feel better.

The premise, of course, is that it hydrates faster because – well, actually, I forget why, and the explanation has long been expunged from the website, which pretty much stops at informing you that you’re drinking “supercharged ionized alkaline water.” Why is Essentia’s high-pH water better? The answer to that FAQ is that it “provides the body with necessary hydration.” Reference to a five-year-old clinical study attesting to the brand’s ability to lower blood viscosity is similarly buried in the FAQs. But none of this necessarily matters, now that the company had dialed down its specific functional claims in favor of general lifestyle exhortations like “overachieving H2O.” So maybe it’s more of a breakthrough in brand building than in sports medicine, but it’s still a breakthrough.

There seems to be a special place in American consumers’ hearts for beverage brands that offer a highly generalized promise of elevating their health and well-being, so that a brand positioned that way seems to break out every decade or so. Then it gets acquired, starts its slow fade and clears the way for the next one. Label readers at Sprouts and Whole Foods aside, these shoppers don’t necessarily care to understand how these elixirs work their magic. All they need is a general assurance that the drink is good for you – or that it signals that you’re a person who cares what she puts in her body – and that it tastes good, preferably while it’s also low in bad stuff like sugar, calories and artificial sweeteners.

So Glaceau parlayed the pixie-dust levels of vitamins in Vitaminwater (and the “for taste” levels of electrolytes in sibling brand Smartwater) into a $4.1 billion exit to Coca-Cola. Bai didn’t seem to get much traction while it extolled how it was heroically rescuing coffee growers by buying their useless coffee fruit, but once it segued to being a generalized “antioxidant infusion” it picked up momentum, leading to a $1.7 billion exit to Dr Pepper Snapple Group. Essentia’s exit wasn’t quite of that magnitude (I’ve heard somewhere approaching $700 million) but it’s an impressive feat nevertheless. In fact, I was beginning to think the brand had gotten to a point where it might have been too big to find a buyer, in a period where many of the most obvious buyers seem to be on the sidelines for mega-M&A. That’s an issue worth discussing too.

From what I’d heard, the company had been poking around for a buyer for a while, seeking $1.5 billion or more – a rich multiple for a brand that did $192 million in sales last year. As I said, the planets didn’t seem to be aligned on this one. Coca-Cola is in general retrenchment mode on brands, and still riding Smartwater to good effect, even if that brand doesn’t seem to stretch well into trendy segments like Essentia’s alkaline bailiwick. PepsiCo really could use a high-end water as its art-gallery-in-a-bottle Life WTR falters but it’s still digesting its Rockstar acquisition at $3.85 billion and trying to finally get back in the game in energy. KDP is riding Core and Evian waters while promising investors it will keep paying down debt rather than doing anything crazy. (As “perfectly balanced” water, Core launched as the anti-Essentia, its point of difference being that it’s not really different from regular water. That positioning sleight of hand is worth its own column!) And again, seasoned beverage players like the Big 3 soda companies had to be wondering how heavily they could safely invest in an alkaline-water category that could be undermined at any time by an adverse medical study or two.

That seemed to leave the best possibility as strategics looking to make a statement. They may not be looking to overpay, but hey, the higher the price, the bigger the statement, right? So the beer giants Anheuser-Busch InBev and Molson Coors, trying to signal their intent to play beyond beer, were likely to be in the mix. And then there was Nestle, hiving off its commodity water brands like Poland Spring and Arrowhead in order to confine its focus to high-end brands. It already boasts storied sourced imports like Pellegrino, Perrier and Acqua Panna, but how about a foray into functional water? For Nestle, landing Essentia – at a relatively modest multiple, no less – was the perfect solution. It adds a high-end growth engine that doesn’t have to travel across an ocean in boats and, depending on how this plays out, maybe gets to piggyback its other water brands onto Essentia’s robust DSD network. As for Essentia’s founder and investors, they can exit with their heads held high, having created a brand that’s beloved among its adherents and navigated a severe pandemic and recession to a reasonably lucrative reward. Like their water, they overachieved in a brutally competitive sector.