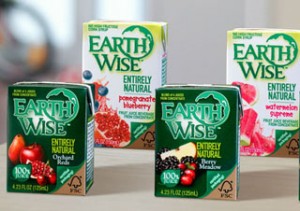 For the first time in the U.S., beverages are being filled in aseptic carton packs displaying the FSC label of the Forest Stewardship Council. Johanna Foods has launched ‘Earth Wise’ brand juices and juice drinks in combibloc Mini 125 and 150 ml carton packs from SIG Combibloc with the FSC label in the U.S. The FSC label verifies that the raw paperboard used to make the carton packs was manufactured using only wood fibers that can be proven to originate from responsibly managed forests certified according to FSC guidelines, or from other controlled sources managed in accordance with FSC standards.

More and more consumers are placing a high priority on healthy eating, and selecting foods that are as natural and unprocessed as possible. Increasingly, they are also seeking out more environmentally friendly packaging solutions. Johanna Foods, based in Flemington, New Jersey, is turning this into a total concept. And with its ‘Earth Wise’ brand the company is bringing out a range of premium juices and juice drinks in packages that are renewable and certified, and that originate from responsibly managed forestry: aseptic carton packs from SIG Combibloc, bearing the FSC label.

Johanna Foods is one of the biggest manufacturers of juice drinks, juices and yogurt in the USA, and has built a name for itself with brand manufacturers and in the retail industry as a leading co-packer. The company has now been working with SIG Combibloc for more than five years. Johanna Foods is the first company in North America to offer products in FSC-labeled carton packs from SIG Combibloc.

The FSC is an international, independent, not-for-profit organization that is committed to pro-moting the responsible and exemplary management of forest resources in accordance with in-ternationally binding standards. For this purpose, the FSC issues certificates for wood and timber products originating from socially and environmentally responsible forestry. FSC is the only forest certification scheme that is accepted and supported by all major international envi-ronmental protection organizations.

With ‘Eco Active’, Joanna Foods has set itself a mission to create products where not only the beverages, but the production process and packaging as well, are intended to have as little impact on the environment as possible. This is where carton packs from SIG Combibloc come into play. On average, the carton packs consist up to 75 per cent of pulp obtained from wood, a renewable raw material. Carton packs have obvious environmental benefits – they are extremely lightweight, have a small CO2 footprint, consume very few resources, and are fully recyclable

Making sure that the main raw material comes from responsibly managed forests is a firm component of SIG Combibloc’s corporate strategy. SIG Combibloc was the first aseptic car-ton manufacturer to guarantee that all the suppliers of its raw paperboard, and all the com-pany’s own production plants and sales organizations world-wide, are certified in accordance with the FSC criteria for a continuous product chain of custody (CoC). This certification – in SIG Combibloc’s case, carried out by the Rainforest Alliance – means that SIG Combibloc can offer its customers world-wide carton packs that are permitted to carry the label ‘FSC Mix’. The FSC logo on the beverage cartons gives consumers a visible confirmation that all the wood pulp fibers processed to make the carton packs, along the entire value chain from the labeled carton pack all the way back to the forest of origin, are traceable in accordance with the standards of the FSC, and that appropriate quantities of wood from responsible ma-naged, FSC-certified forests were used to manufacture the raw paperboard.

The carton packs of the ‘Earth Wise’ products also carry the familiar RACTM Seal of the Rain-forest Alliance. The Rainforest Alliance is a global environmental organization that has been campaigning for more than 20 years to protect sensitive ecosystems, conserve biodiversity and promote the sustainable conservation of the shared habitats of humans, animals and plants. As part of this campaign, the Rainforest Alliance is active in many different fields of certification, including the cultivation of coffee, cocoa, bananas, citrus fruit, flowers and fo-liage plants.

In addition, this non-governmental organization is one of the founder members of the FSC, and is the world’s leading certifier for FSC-compliant forestry, also checking and confirming compliance with the FSC standards in SIG Combibloc’s production plants. The widely recognized RACTM Seal of the Rainforest Alliance, featuring the green frog, on product packaging is an extra proof that the packaging has been critically scrutinized and positive endorsed by the organization.

SIG Combibloc is one of the world’s leading system suppliers of carton packaging and filling machines for beverages and food.

The widely recognized RACTM Seal of the Rainforest Alliance, featuring the green frog, on product packaging is an extra proof that the packaging has been critically scrutinized and positive endorsed by the organization.SIG Combibloc is one of the world’s leading system suppliers of carton packaging and filling machines for beverages and food. In 2010 the company achieved a turnover of 1,360 million Euro with around 4,650 employees in 40 countries. SIG Combibloc is part of the New Zealand based Rank Group. SIG Combibloc’s FSC license code is FSC-C020428.