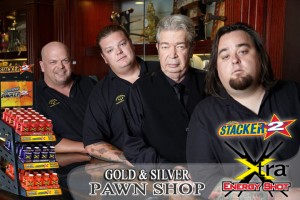 Andover, N.J.  NVE Pharmaceuticals, the manufacturer, marketer and distributor of diet and energy supplements as well as 6 Hour Power™ and Xtra® Energy Shots, announced that it has jumped with both feet back into the advertising spot light!

Through integrated product placement, celebrity endorsements and “brought to you by” billboards during MTV’s hit reality program The Jersey Shore and History Channel’s top rated program The Pawn Stars the Stacker2 line is receiving a staggering 15,000,000 eyeballs weekly.

On August 4th Stacker2® once again stepped out with the launch of a multi-million dollar advertising campaign supporting their 6 Hour Power™ brand during the season 4 premiere of The Jersey Shore. During the show, lead characters Sammi “Sweetheart” Giancola and Deena Cortese both starred in a commercial endorsing 6 Hour Power™. Recently released numbers for the season premiere of The Jersey Shore confirmed that the premiere delivered an audience size of 8.8 million viewers. Stacker2® 6 Hour Power™ aired three :30 second commercials during the season premiere, and will continue to air new creative throughout the season. The message conveyed in each commercial is that Stacker2® 6 Hour Power™ Energy Shots’ regular and extra strength are always priced at 2 for $3.99.

But the crazy train doesn’t stop there.

“Stay tuned” smiled Karen Finocchio, V.P. of Marketing and Advertising for NVE’s in-house agency Storm Media, “6 Hour Power™ and Xtra® Energy Shots are hot, and the tides are turning.” Through the years NVE has developed high profile, engaging advertising campaigns, which have successfully grown the Stacker2® name into a highly recognized global brand. Since 1997 Stacker2® products have been represented and endorsed by scores of high profile athletes and celebrities. Building campaigns using print, radio and television’s top rated programming has brought both nation and global recognition to the Stacker2® product line.