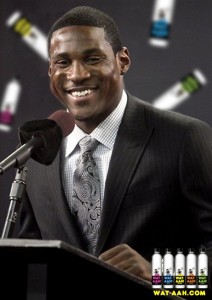 NEW YORK (Sept. 7, 2011) — NFL Arizona Cardinals cornerback, Patrick Peterson, has announced his partnership with WAT-AAH! — a brand of bottled water aimed at kids with a mission to spread the message of healthy hydration and create awareness against childhood obesity.

Peterson is a 21-year-old Florida native who has earned numerous All-American team selections during his time playing defensive back at Louisiana State University, named “Player of the Year” by USA Today in 2010, and earned the NCAA Football”s Bednarik award as well as Jim Thorpe award — nation”s top defender and top defensive back, respectively. Widely regarded as the best overall athlete in the 2011 NFL draft, Peterson was selected as the 5th overall pick by the Arizona Cardinals.

“When I heard the news that this generation of kids could be the first to live shorter lives than their parents due to obesity, I knew I had to try to make to make a difference,” says Peterson. ” I learned about WAT-AAH! through Legacy Growth Partners and SWC Management and saw the brand”s growth and potential as well as its ability to help in this fight against childhood obesity. After witnessing the power WAT-AAH! has to attract and get kids excited about drinking water I decided to join their mission,” he adds.

Peterson recently participated in the NFL”s Play 60 initiative — a national campaign to encourage youth health/fitness and physical activity for at least 60 minutes a day, designed to tackle childhood obesity. He also recently founded The Patrick Peterson Foundation for Success, a charitable organization dedicated to enrich the physical, mental and emotional well being of children.

Two and a half years ago, Rose Cameron founded WAT-AAH! with the goal to reverse kids’ dependency over sodas, sports drinks and sugary drinks, and to convince them to drink the only healthiest option: water. As a former advertising and branding executive, Rose understood that kids perceived water as ”boring” and set out to create WAT-AAH! — a relevant, contemporary and exciting brand for kids. As a testament to its success, WAT-AAH!”s sales and distribution across the country has grown significantly and with the recent legislation to drastically improve school nutrition and Mrs. Obama”s Let”s Move program, WAT-AAH! has gained acceptance in over 1,000 schools/districts across the country. WAT-AAH! was also recently named as the exclusive water for the Beyonce Knowles and Let”s Move! Flash Workout Event. “We are very proud of this new partnership. Patrick is in a terrific and significant position to speak to kids and to set a positive example. He recognizes the urgency of improving kids” health and addressing obesity,” says Cameron. “We applaud his commitment to kids and endorsement of ”water” as opposed to sodas, sports drinks and other sugary drinks. We wish more athletes would do the same by getting involved in brands and products that are undeniably healthy for kids. We have too many superstars endorsing junk food, it”s time for a change,” adds Cameron.