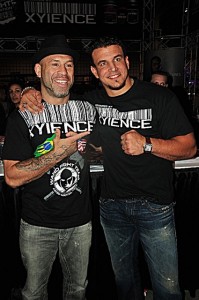 On Saturday, Dec. 10, Mir (16-5-0) added a victory to his now three-win streak by defeating Antonio “Minotauro” Nogueira by submission at UFC®140: Jones vs. Machida at the Air Canada Centre in Toronto, Canada.  Dana White, UFC president, called Mir’s impressive victory “the submission of the century” at the post fight conference.  Mir now checks in as one of the top-five UFC heavyweights.

“It’s been an incredible year for me and for the UFC, so there is a lot to celebrate this holiday weekend,” says Mir, a Las Vegas native and resident who is a former UFC heavyweight champion. He signed with XYIENCE as an athlete brand ambassador in September of this year. “There is nowhere like Las Vegas on New Year’s weekend, so I’d like to thank XYIENCE and GNC for this chance to spend some time with the fans, who are the reason our sport is so great.”

In a recent deal with GNC, XYIENCE increased its retail presence in the United States and 1,550 GNC stores around the U.S. are set to carry 16-ounce cans of Xenergy Premium Mango Guava, Cherry Lime, Cran Razz and Xenergy Xtreme Fruit Punch. Another 300 GNC franchise stores also have the opportunity to carry sugar-free Xenergy, which is the official energy drink of the UFC.

Mir, a Las Vegas native and resident is a key component of XYIENCE’s marketing initiatives throughout the Southwest and Rocky Mountain regions. His appearance at GNC in Las Vegas is a part of the brand and retailer’s special event schedule kicking off the new relationship.

About Frank Mir
Mir, 32, was born and raised in Las Vegas. His parents, both devoted martial artists, introduced him to karate when he was just 4 years old. He went on to obtain his black belt in Kenpo Karate as a teenager, and in high school he won the Nevada State High School Wrestling Championships in the heavyweight division. Later, he went on to earn a black belt in Brazilian Jiu Jitsu and become an accomplished Muay Thai kickboxer.

In 2004, Mir was involved in a devastating motorcycle accident that took him out of the Octagon for over two years. He returned in 2006, and with a current record of 15-5-0 most recently has defeated Roy Nelson at UFC® 130: Rampage vs. Hamill and Mirko Filipovic at UFC® 119: Mir vs. Cro Cop.

Mir currently resides in Las Vegas with his wife and their four children.