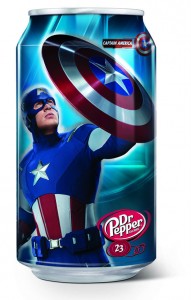 PLANO, Texas–(BUSINESS WIRE)–Dr Pepper and Marvel are assembling the greatest collection of collectible cans featuring the latest Super Hero adventure, “Marvel’s The Avengers.” The cans feature members of Earth’s Mightiest Heroes – each in a specific pose. When the eight cans are assembled side-by-side, fans can see the full power of the “Marvel’s The Avengers” team linked together to fight the battles that we never could.

The new Dr Pepper commercial dramatizes the potential for anyone to be a hero. The light-hearted spot features a group of one-of-a-kind people assembling to impress comic book legend Stan Lee.

For those who can’t wait to take down Loki and his evil army, Dr Pepper has also released “Skrulls Takedown,” a free online game on DrPepper.com inspired by the numerous classic battles featured in Marvel comic books over the last forty years between the alien shapeshifters and the Avengers. For those looking to become one of Earth’s Mightiest Heroes, this addictive game allows fans to emulate their favorite Avengers member, just as they appear in the New Avengers comic book and fight for justice as Thor, Iron Man, Captain America or The Hulk. Fans can share their high scores and challenge friends to join in on the action via Twitter and Facebook.

Dr Pepper, a brand of Dr Pepper Snapple Group (NYSE: DPS), is the oldest major soft drink in the United States. Since 1885, the 23 flavors of Dr Pepper have earned legions of fans that enjoy its unique, refreshing taste. The brand is available in Regular, Low Calorie, Diet, Caffeine Free and Cherry varieties. DPS is a leading producer of flavored soft drinks, marketing Dr Pepper and 50-plus other beverage brands across North America and the Caribbean. For more information on Dr Pepper, visit www.drpepper.com or www.drpeppersnapple.com.

Marvel Entertainment, LLC, a wholly-owned subsidiary of The Walt Disney Company, is one of the world’s most prominent character-based entertainment companies, built on a proven library of over 8,000 characters featured in a variety of media over seventy years. Marvel utilizes its character franchises in entertainment, licensing and publishing. For more information visit www.marvel.com.

About Marvel’s The Avengers

Marvel Studios presents “Marvel’s The Avengers” – the team up of a lifetime, featuring iconic Marvel Super Heroes Iron Man, The Incredible Hulk, Thor, Captain America, Hawkeye and Black Widow. When an unexpected enemy emerges that threatens global safety and security, Nick Fury, Director of the international peacekeeping agency known as S.H.I.E.L.D., finds himself in need of a team to pull the world back from the brink of disaster. Spanning the globe, a daring recruitment effort begins.

Starring Robert Downey Jr., Chris Evans, Mark Ruffalo, Chris Hemsworth, Scarlett Johansson, Jeremy Renner and Tom Hiddleston, with Stellan Skarsgard and Samuel L. Jackson as Nick Fury, directed by Joss Whedon, from a story by Zak Penn and Joss Whedon with screenplay by Joss Whedon, “Marvel’s The Avengers” is based on the ever-popular Marvel comic book series “The Avengers,” first published in 1963 and a comics institution ever since. Prepare yourself for an exciting event movie, packed with action and spectacular special effects, when “Marvel’s The Avengers” assemble in summer 2012.

“Marvel’s The Avengers” is presented by Marvel Studios in association with Paramount Pictures. The film is being produced by Marvel Studios’ President Kevin Feige and executive produced by Alan Fine, Jon Favreau, Stan Lee, Louis D’Esposito, Patricia Whitcher, Victoria Alonso and Jeremy Latcham. The film releases May 4, 2012, and is distributed by Walt Disney Studios Motion Pictures.