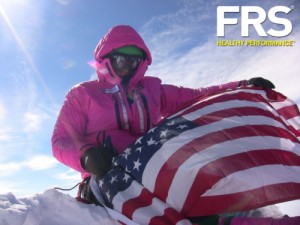 With successful ascent of Vinson Massif in Antarctica, 15 year old becomes the youngest person ever to climb “The 7 Summits”

Foster City, CA (January 3, 2012) – FRS® Healthy Performance™ reached new heights fueling teen sensation Jordan Romero as he became the youngest person to climb the tallest mountains on all seven continents at age 15. Romero reached the summit of Vinson Massif in Antarctica on December 24 to break a world mountain climbing record that few believed possible. Romero has been fueled by FRS® Healthy Performance™ products since his successful ascent of Mt Everest at the age of 13.

“Everyone here at FRS is thrilled, but never surprised, by the amazing accomplishments of our world class athletes. Jordan’s latest triumph proves he is not only an outstanding athlete with historic achievements, he is also a positive influence that believes in a healthy active lifestyle… what FRS is all about,” said Carl Sweat, President and CEO of The FRS Company. “We can”t wait to support him on his next adventure.”

“After Mt. Everest we learned a bit about keeping our drinks from freezing and we relied on FRS as our only fuel for the final three day ascent to the summit,” said Jordan Romero. “We carried FRS concentrate with us all the way from California to Antarctica because it’s a healthy drink we can trust to get us to the summit. In Antarctica, the constant cold and close quarters tested our immune system and every function of our body to the maximum. We relied on FRS to get us through.”

About The FRS Company

The FRS Company produces a full line of Healthy Performance™ products, including ready-to-drink beverages, chews, powdered drink mixes, shots and concentrates. FRS products use the super antioxidant quercetin, found naturally in many fruits and vegetables, which has been shown in multiple clinical trials to provide sustained energy, increased endurance, and immune system support. Originally developed by a team of Harvard scientists for chemotherapy patients, FRS products are now championed by some of the world’s most elite athletes, such as seven-time Tour de France winner Lance Armstrong, NFL star Tim Tebow, Captain of the US Women’s Soccer Team Christie Rampone and over 20 professional sports teams. The venture capital and private equity firm, Oak Investment Partners, is a major investor in the company. FRS products are available online or at major retail stores nationwide. For a free trial of the product, visit www.FRS.com.