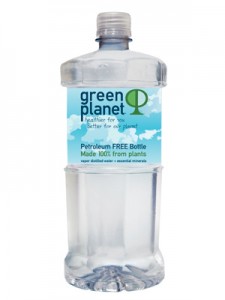 Green Planet Water in a 100% Plant Based Bottle is the Official Water Sponsor of Iconic Surf Event, Mavericks Invitational

Fairfax, CA (PRWEB) February 26, 2012 — Category innovator Green Planet Water is thrilled to announce that it is the Official Water Sponsor of Mavericks Invitational 2011/2012. Mavericks Invitational is the world’s premier, high adrenaline, big wave surfing event. This one-day, invitation-only surfing competition is held at the legendary Mavericks surf break located ½ mile offshore at Pillar Point Harbor, just 20 minutes south of San Francisco. The 24 most daring big-wave surfers in the world will attempt to tame the massive swells on the best day of the 2012 winter season.

Green Planet Water will be available at the first-ever Mavericks Invitational Festival at the eco-friendly Oceano Hotel & Spa in Half Moon Bay Harbor. The Festival’s 12,000 anticipated attendees will have a chance to meet the surfers, enjoy music, food and beverages and be a part of the Awards Ceremony as the 2012 winner is crowned. As surf fans know, the date of this event is up to Mother Nature. For wave updates, additional details and tickets, visit MavericksInvitational.com.

“We are so excited to partner with this event, which celebrates the power and beauty of the earth and its oceans. It reaffirms our commitment to providing a viable alternative to petroleum-based plastic bottles,” said Green Planet CMO Janet DiGiovanna. Green Planet’s unique plant-based bottle is derived from completely renewable plant resources. The bottle is recyclable, commercially compostable and reusable when hand-washed between uses.

Here are a few of the environmental benefits of Green Planet Water:

Founded in 2009, Green Planet is the leading bottled water company to market a 100% plant-based bottle. Offering the better bottle solution, Green Planet’s bottle is recyclable, reusable (when hand-washed between uses), petroleum and BPA free and will commercially compost in just 84 days. The water in Green Planet’s bottles is vapor distilled for purity with minerals carefully added for taste. It is bottled regionally for distribution, reducing transit miles and total carbon footprint.

Where to Buy Green Planet Water

Green Planet Water is widely available to San Francisco Bay Area consumers at supermarkets including Albertson’s, Lucky, Safeway, SaveMart, Lunardi’s, Nugget Markets, as well as hundreds of neighborhood stores. Green Planet Water is growing rapidly in distribution around the US. For the most current retail availability list, visit this link on the Green Planet website.

Travelers will find Green Planet Water in many international airports, including San Francisco, San Jose, Phoenix, San Diego, Ontario and Portland, Oregon, as well as in hotels such as the SF Hilton, The Del Coronado in San Diego, Mandarin Oriental in Miami, and Hotel Felix in Chicago. In addition, it can be found in museum cafés around the US, including the California Academy of Sciences and The Chicago History Museum.

It is served at Apple, Inc.’s corporate headquarters and many fine dining restaurants such as Greens in San Francisco. Health, wellness and sporting facilities (Yoga Works), various golf and country clubs, as well as college (University of California at San Diego) and high school campuses across the US have embraced Green Planet Water for their members and students.

(1) NatureWorks
(2) From an independent study by Biodegradable Products Institute
(3) http://www.allbusiness.com/chemicals/plastics-rubber-industry-plastics/14119966-1.html