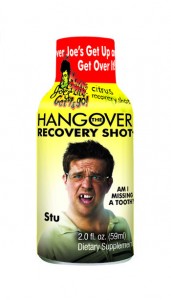 “This is a tremendous opportunity for us to continue our exponential growth with the support of new investors and the guidance and expertise of Accredited Members behind us,” said Hangover Joe’s co-founder Mike Jaynes. “Hangover Joe’s has become an international sensation through our partnership with Warner Bros. Pictures and new distribution deals in Canada, Australia and New Zealand. We’re eager and ready to ramp up and expand our reach both around the globe and with new distributors and retail outlets here in the U.S.”

“The merger just makes good business sense, giving us the opportunity to grow the Hangover Joe’s brand both domestically and internationally in any number of unique and exciting ways,” said co-founder Shawn Adamson.

In just three years since its market debut, Hangover Joe’s The Hangover Recovery Shot has become the Number One selling hangover recovery product in the country, favored by young partiers and mature individuals alike to help them feel revived and alert the morning after an all-night bash or a few too many drinks with the boss or a client.

Named the Number One New Product at the 2011 National Convenience Store Show, Hangover Joe’s has also earned a Four-Star rating from BevNET Magazine, the leading beverage industry trade magazine. The Hangover Joe’s crew, complete with nurses to administer The Recovery Shot to guests, is a regular at major sporting events and concert gatherings around the country, including the massive Rock on the Range festival in Columbus, Ohio, the Carolina Rebellion in Rockingham, N.C. and St. Louis Mardi Gras.

“Hangover Joe’s has an incredibly wide market appeal ranging from college students and young professionals to busy parents and mature professionals,” said JW Roth, CEO and co-founder of AMHC. “The fact that it is so effective has already gained it a loyal following, and there is outstanding potential for growth with this vibrant, energetic company.”

The only morning-after recovery shot on the market designed specifically to relieve hangover symptoms, The Hangover Recovery Shot is a tasty, smooth, fully-loaded 2 oz. shot taken first thing in the morning to help ease the effects of alcohol consumption. Featuring Hangover Joe’s patent-pending Get Up and Go Blend, The Hangover Recovery Shot packs a nutritional punch, made from 100 percent all-natural ingredients that restore the body’s essential antioxidants and nutrients to relieve symptoms. And, unlike energy drinks and shots that rely on caffeine, The Hangover Recovery Shot contains only as much caffeine as a single cup of premium coffee to help anyone quickly feel revived and alert, without the exhausted crash later.

An officially licensed product of Warner Bros. “The Hangover” movie, Hangover Joe’s The Hangover Recovery Shot is now available in an exclusive collectible series of movie-theme labels. Look for Hangover Joe’s at select retailers, through beverage distributors or order online at www.hangoverjoes.com.

Hangover Joe’s is the exclusive producer of The Hangover Recovery Shot, the official licensed product of The Hangover movie and the nation’s Number One selling hangover recovery product. Taken the morning after and featuring a patent-pending blend of antioxidants, vitamins and herbs, Hangover Joe’s Recovery Shot is the quickest way to overcome the day-after side effects of alcohol consumption. For more information, visit www.hangoverjoes.com, check us out on Facebook, YouTube or follow us on Twitter @HangoverJoes.