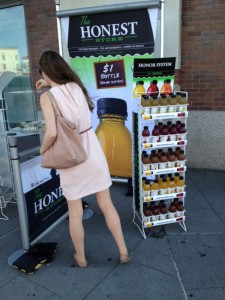 … and more than 50 other interesting match-ups, data points and statistics.

From August 8th – August 19th, Honest Tea set up more than 50 unmanned pop-up kiosks in over 30 cities across the country, with each location stocked full of Honest Tea and Honest Ade. Signage at the stands offered the beverages for $1 per bottle with payment based on the honor system, going into a clear box on-site. The outcomes were recorded using a customized digital tracking application by undercover observers nearby. Data collected for the National Honesty Index included geographic locations such as cities and iconic business districts; observable characteristics like gender and hair color; groupings of people including baseball fans, comic book fans, beachgoers, people with kids and more.

“We’ve expanded our social experiment to measure the honesty of observable characteristics, including location,” Seth Goldman, President and TeaEO of Honest Tea. “Though our experiment might not pass muster with a social scientist, the results present fascinating and fun insights about the American population.”

The complete Honesty Index is available at http://www.nationalhonestyindex.com/ where visitors can check out and compare the honesty statistics of more than 30 cities and 50 different groups of people, and build customizable info-graphics, which are shareable across many social platforms.

“While the National Honesty Index measured consumers’ honesty in almost three times as many cities as last year, it was great to see that by and large, people across the country are honest,” said Peter Kaye, Honest Tea VP of Marketing. “With the exception of the man who tried to steal our duct tape, it’s inspiring to see these results are consistent with our efforts to be refreshingly honest in making our beverages with real, organic ingredients.”

Honest Tea will match the money collected and donate it to City Year, an AmeriCorps program which unites young people of all backgrounds for a year of full-time service. The goal of the nonprofit is to build community by helping to turn around high-need schools and get at-risk students back on track.

“Since one purpose of our experiment is to highlight the level of trust in communities across our nation, we’re glad to donate the money collected from this year’s experiment to City Year, which helps make our communities stronger,” said Goldman.

About Honest Tea
Founded in 1998, Bethesda, MD based company Honest Tea is the nation’s top-selling organic bottled tea company specializing in lower calorie beverages that are ‘just a tad’ sweet. Honest Tea’s product lines include: Honest Tea ready-to-drink bottled teas, Honest Ade and Honest Kids organic thirst quenchers. All varieties are USDA-certified organic and all tea varieties are Fair Trade Certified™. In addition to being named one of The Better World Shopping Guide’s “Ten Best Companies on the Planet based on their overall social and environmental record,” Honest Tea was also listed as one of PlanetGreen.com‘s “Top 7 Green Corporations of 2010,” and was ranked by The Huffington Post as one of the leading “8 Revolutionary Socially Responsible Companies.” Honest Tea was purchased by The Coca-Cola Company in March 2011 and operates as an independent business unit. For more information visit www.honesttea.com.