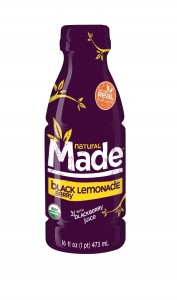 Chicago, IL (March, 2012) — Once trumpeted as THE drink of summer, lemonade is flexing its versatility and causing stores to clear shelf space and take notice year round. Single-serving lemonade sales are up more than 11% in the past year and consumers are asking for it outside the typical summer season.

“There are a lot of companies scrambling to develop a lemonade line to meet the demand” says Charley Snell, founder MADE Drinks Company. “But MADE was already sourcing the best organic lemons for our green tea drinks and the other organic fruits that match so well with lemonade.”

MADE Drinks Company’s original MADE Lemonade has been on the market for almost a year. Now the company is rounding out the lineup with 3 new organic lemonade offerings set for release in March 2012. MADE Half & Half is the first organic green tea-lemonade combo on the market. It’s a fresh organic take on the classic refreshment typically made with black tea and lemonade. The company is also rolling out MADE Blackberry Lemonade created with organic lemon and blackberry juices. And MADE Pink Lemonade with no artificial colors. 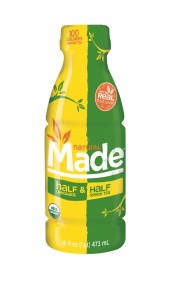 “Unlike a lot of other pink lemonades, we use organic strawberry juice to make ours pink” says Snell “you won’t find any stripped juices in our bottles.” MADE Pink Lemonade is the only pink lemonade on the market that is pink from strawberry juice and not food coloring. The MADE Lemonades will launch in 4 major markets with a suggested retail price of $1.99 a bottle.

About MADE Drinks Company

MADE Drinks Company is a Chicago-based, conscious company in business to make products that support good lifestyles for people who pay attention. MADE is committed to bringing refreshment made with organic and natural products to thirsty people everywhere while remaining committed to being honest about processes, practices and materials. MADE Drinks Company distributes the MADE® line of organic drinks. For more information visit: www.madedrinks.com or call 847-386-6670.