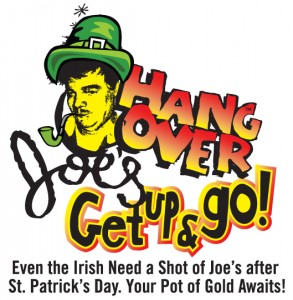 U.S.A. (March 5, 2012) – For all those left feeling a little green the day after St. Patrick’s Day, there’s hope. Instead of searching in vain for the wish-granting powers of the fabled four-leaf clover or an elusive Leprechaun, ordinary Joes can triumph in the battle of the morning after with the legendary contents of a little yellow bottle – “The Hangover”™ Recovery Shot. Those who threw caution to the wind and tipped a pint or two while enjoying everything Irish can now join millions of Americans in a celebratory toast to a rapid recovery on Sunday, March 18, 2012 – the first annual NATIONAL HANGOVER JOE’S DAY.

According to the 2009 American Community Survey, U.S. residents claiming Irish ancestry are nearing the 37 million mark – eight times the current population in Ireland. St. Patrick’s Day marks the death of the 5th-century Catholic saint and has been observed as a religious holiday on the Emerald Island for more than 1,000 years. The Irish have traditionally used this break in Lent as a reason to sneak off to the pub. Americans took the idea of imbibing to heart and transformed the “high holiday” into a national party celebrating all things Irish. These days, March 17th places at the top of the list as the most exuberantly observed U.S. drinking holiday of the year, making March 18th the natural choice for official NATIONAL HANGOVER JOE’S DAY.

“St. Patrick’s Day is one of the largest days of alcohol consumption in the U.S.A.,” said Shawn Adamson, National Sales Director of Hangover Joe’s Products. “‘The Hangover’™ Recovery Shot gives consumers the advantage of waking up with hangover relief at hand.”

Not only can “The Hangover”™ Recovery Shot give a much needed boost to American partygoers nationwide, but it also has the potential to save businesses, big and small, plenty of green – greenbacks that is. In the past, March 18th has taken precedence as one of the leading “sick days” in the country. Hundreds of thousands of working stiffs and executives alike have traditionally stayed at home on the days directly after the holiday in order to nurse the after effects of a rousing St. Patrick’s Day. The national recovery of this holiday costs American companies millions of dollars each year.

According to the National Institute on Alcohol Abuse and Alcoholism, alcohol abuse costs the United States an estimated $185 billion each year. Nearly half of that green, $88 billion in fact, is directly linked to binge drinking and the related instances of alcohol-induced injuries and the productivity loss from morning after illnesses. NATIONAL HANGOVER JOE’S DAY brings attention to this dilemma by highlighting the potential effects of excessive and binge drinking.

“‘The Hangover’™ Recovery Shot could save the American economy and its consumers billions of dollars in coming years,” said Adamson. “This simple recovery aid could significantly decrease alcohol-related absenteeism and lost productivity in the workplace. The implications are tremendous.”

The U.S. isn’t the first country to feel the financial pinch of holiday-related binge drinking. In the early 1900s, Irish MP James O’Mara took a stance against the excessive alcohol consumption on St. Patrick’s Day in Ireland by instituting a law that required pubs and bars to close their doors on March 17th. This sobering provision was finally repealed in the 1970s.

American officials haven’t taken such drastic measures, but they are preparing for crackdowns and deterrents aimed at reducing the epidemic of binge drinking on St. Patrick’s Day. For instance, the Sacramento Police Department is running a county-wide sweep to collect DUI offenders with outstanding warrants. In Savannah, officials are planning a show of arms with a task force aimed at enforcing state laws prohibiting alcohol service to visibly intoxicated patrons. San Francisco legislators took things a step further when they attempted to add a seven cent per ounce fee to help cover the cost of soaring alcohol-related illness and injury, but the measure was eventually set aside.

In the end, Americans revelers just shrug their shoulders, raise a pint, and shout “Slainté!” as they toast to good health. It just goes to show that even average Joes are Irish on March 17th, which is good reason for Americans to stock up on “The Hangover”™ Recovery Shot for the inevitable morning after. As the officially licensed product for the Warner Bros movie “The Hangover,” this rejuvenating blend of essential vitamins and exotic herbs is available at local retailers including GNC and 7-11 stores. For best results, drink a recovery shot immediately upon awakening. For more information or to order “The Hangover”™ Recovery Shot directly, visit www.hangoverjoes.com.