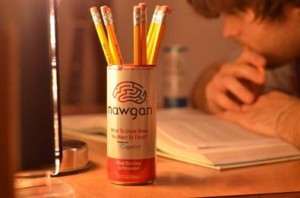 ST. LOUIS, MO (February 14, 2012) – Nawgan Products LLC, the makers of Nawgan, the innovative alertness functional beverage, announces that student, Jacob Brcic, of Columbia, MO, is the winner of the “How Do You Use Your Nawgan?” Facebook Sweepstakes. Jacob’s entry won over hundreds of other creative photographs, which were entered after the company requested that Nawgan fans snap a creative photo of themselves using cans of “Nawgan.” Though the winner was chosen at random, entries demonstrated quirky, fun, athletic and artsy ways the beverage helps participants in their daily lives.

Brcic, a student at the University of Missouri, first heard and was encouraged to enter the contest by a friend. A Fine Arts major with an emphasis in Graphic Design and Photography, Brcic’s inspiration for the photo came for a project he completed in late 2011: “I took a different creative photo every day for a year. It was a personal project and the photo I choose for the sweepstake was day 354 out of 365,” said Brcic. “Of course, I used Nawgan to my advantage to help brainstorm ideas for the photo. I already knew I wanted it to have something to do with the act of thinking and studying, but I wanted the Nawgan can to be the main focus of the shot.”

Brcic credits his roommate with the idea to make a pencil holder out of a Red Berries Nawgan can, Brcic’s favorite flavor. Brcic framed the shot to center on the Nawgan can’s slogan
“What To Drink When You Want To Think.”

“The response (redundant for the sweepstakes was simply tremendous; we knew our fans were smart and savvy but the level of creativity and skill was truly inspiring,” said Dr. Robert Paul, founder of Nawgan. “Entries came from Nawgan drinkers all over the country, from all walks of life. We are pleased that Jacob will be able to use his prize to further his incredible work in graphic design and photography as he truly has a remarkable talent.”

Available in Red Berries Caffeinated, Berry Non-Caffeinated and Orange Caffeinated, Nawgan contains natural ingredients and is low in calories and sodium. The key ingredient, Cognizin, works in harmony with the other ingredients in Nawgan to support alertness and concentration.  Studies have demonstrated that healthy adults who used Cognizin daily exhibited significant improvements in performance on tests of alertness and concentration, as well as brain activity visualized on sophisticated imaging techniques. Nawgan is available nationwide in Vitamin Shoppe locations as well as in select Walgreens, Straub’s Fine Grocers, Dierberg’s Markets and Shop’n’Save stores.

Nawgan Products, founded in 2007 by brain health researcher Dr. Robert Paul and lead by CEO Jim von der Heydt, is a developer of products that support optimal brain function.  Nawgan launched its patent-pending beverage designed to sharpen the mind in 2010, in 2012, Nawgan earned NSF International Certified for Sport® certification and has received accolades from Beverage World Magazine, Beverage Innovation Magazine and Zenith International. Nawgan was developed in St. Louis and offers consumers improved concentration and focus in an all-natural beverage.