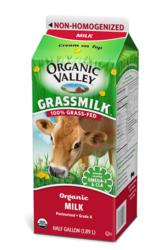 Organic Valley Grassmilk is sourced from pasture-raised cows grazing in the lush pastures of California’s north coast. The cows eat only fresh grasses and dried forages, like hay. They do not eat supplemental grains or soybeans.

“It’s a simple truth that cows naturally love to eat grass,” said Organic Valley Grassmilk farmer-owner Jim Regli. “We pasture-raise our cows to feed them what already grows here in the beautiful north coast of California. Rye grass, white clover, and orchard grass are the components of our nutrient-dense pastures. When our cows eat well, we do, too.”

Grassmilk is produced on farms like the Reglis’, where Jim, his wife Susan and their seven children farm about 300 acres in the redwood region of Humboldt County.

Nutritionally, Grassmilk is flowing with Omega-3s, CLA, and calcium. It all starts with the soil—organically managed soils that support diverse forages and the highest quality pasture grasses which the cows eat. Grassmilk is minimally processed and non-homogenized, or “cream on top” milk (with exception of the fat-free variety.)

Like single-vineyard wines or artisanal chocolate, the taste profile is a result of where the cows live and what they eat. Northern California coastal plains feature river valleys thickly topped with rich, alluvial soil. Giant redwoods stand sentinel between the Pacific Ocean and the verdant pastures where Grassmilk cows dine.

Organic Valley Grassmilk comes in three varieties: Whole, two-percent and fat-free with a suggested retail price of $5.49. Grassmilk will be available exclusively at west coast Whole Foods Markets in April 2012, and in natural food stores and food cooperatives thereafter.

Organic Valley Grassmilk will be launched to the trade in Anaheim, Calif., at the 2012 Natural Products Expo West. Visit Organic Valley’s at booth #2414 in Hall C.

Organic Valley is America’s largest cooperative of organic farmers and one of the nation’s leading organic brands. Organized in 1988, it represents 1,687 farmers in 35 states and three Canadian provinces, and achieved $715 million in 2011 sales. Focused on its founding mission of saving family farms through organic farming, Organic Valley produces a variety of organic foods, including organic milk, soy, cheese, butter, spreads, creams, eggs, produce and juice, which are sold in supermarkets, natural foods stores and food cooperatives nationwide. With its regional model, milk is produced, bottled and distributed right in the region where it is farmed to ensure fewer miles from farm to table and to support our local economies. The same farmers who produce for Organic Valley also produce a full range of delicious organic meat under the Organic Prairie label. For further information, call 1-888-444-MILK or visit http://www.organicvalley.coop, http://www.organicprairie.coop and the cooperative’s farmer website, http://www.farmers.coop. Organic Valley is also on Twitter @OrganicValley and Facebook