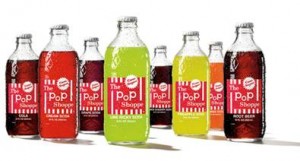 “We are very excited to be a part of this re introduction of a piece of history and to bring back a NW favorite.  There is a ground swell of consumers, young and old, who are already excited to see the brand back to re-live their youth or start new memories as well,” said Bob Brown VP of Sales & Marketing at Maletis Beverage.

The Portland and SW Washington region was home to some of the PoP Shoppe’s strongest US sales during the 1970’s and 80’s. Ask any Portlander that was a child in the 70’s about PoP Shoppe and they’ll remember the brand’s “stubby” glass bottles and vast flavor offerings. They may even recall stocking up at their local PoP Shoppe store off NE 82nd in Portland, or on Cedar Hills Boulevard in Beaverton. Many worked at the local PoP Shoppe bottling plant, the Portland location being one of 27 in the US. Most will remember PoP Shoppe as the coveted prize awarded daily to Smile Winners on the Ramblin’ Rod Show, which aired on FOX 12 Oregon.

The PoP Shoppe story began in 1969, when two entrepreneurs began selling soda in a unique variety of flavors, at independent PoP Shoppe retail outlets. They had s truly sustainable business plan – customers would return their empty bottles each week in PoP Shoppe-branded crates for a refund, and then pick-up fresh bottles for their families. Over the next several years, The PoP Shoppe was operating over 1000 stores in North America.

The PoP Shoppe prospered until competition from private label grocery brands forced The PoP Shoppe to close its doors in the 80’s. In 2002, businessman Brian Alger purchased the trademark for his favorite childhood soda. In 2004, he re-launched The PoP Shoppe brand and today, The PoP Shoppe is available at premium convenience and grocery retailers across the US.

For more information on The Pop Shoppe, visit their Webby-winning website www.ThePoPShoppe.com