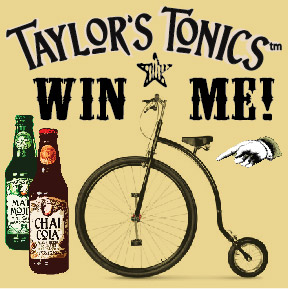 SANTA CRUZ / SAN FRANCISCO, CA–  Taylor’s Tonics announced Friday their year-long promotional campaign, “Many Mini-Pennies”.  Fueled by a deep desire to generate consumer outreach that is both novel and appreciated, the company has solicited the assistance of a Northern Californian bikesmith to create over a dozen customized replicas of Victorian pedal machines.  The design chosen, is commonly known as a ‘High Wheeler’ or a ‘Penny-Farthing’ as a result of the different sized wheels reminiscent of two defunct English coin currency.  Popularized in the mid 1800’s, these machines were the first to be called ‘bicycles’ and gave way easily to the advent of the more modern looking ‘safety bicycle’ in 1880.

“We’ve selected a unique compact design that features a hand brake. Because riding a Penny-Farthing is a blast, but falling from five feet up isn’t,” attests Taylor Peck, co-founder and acting brewmaster at Taylor’s Tonics.  “We’ve been on the hunt for a bicycle promotion over the past year that fit our company’s image,” explains Taylor, “and I think we found it.”

Since 2009, Taylor’s Tonics has produced botanical sodas sold nationwide to specialty and natural food stores.  The brand’s appearance pulls elements of Victorian and Art Nouveau influences with a decidedly modern flair.  Taylor’s produces CSD’s exclusively but has plans for expansion into other segments of the beverage category this year. “We’ll be ready with new surprises at the Natural Products Expo West, and in sticking with our theme we’ll be awarding a Mini-Penny to some lucky attendee,” says Taylor.

“The barrier of entry to interested ‘Mini-Penny’ contestants is intentionally low,” says Taylor, “We’re simply asking for folks to join us on Facebook, and once there, they will be automatically eligible to win”.  Going forward, Taylor plans to use Facebook as a platform to further explain additional (more intensive) contests that may land a person with a bicycle. Upcoming contests may include making films, songs, artwork, or charity participation.  “Our goal is to get everybody on board at Facebook as soon as possible so we can really enjoy the lively conversations that will emerge as the contest evolves,” explains Taylor. “Who doesn’t want to try one of these machines out? Once the bug bites, some folks will stop at nothing to take one for a spin, and we’re happy to act as the conduit to those peoples’ dream.”

The company has also set up an auto-responding email at Penny@TaylorsTonics.com to further explain the contest and direct interested consumers to Facebook.

The campaign officially started Friday online, with an immediate follow up effort by Taylor’s ‘Field Agents’ at San Francisco’s annual Edwardian Ball. “We wanted to ratchet up this promo swiftly, and attending the two day event serendipitously titled ‘The Iron Tonic’ this year by the events producers, drew thousands of people and proved to be quite the method.”  Says Aaron Dolson, Taylor’s Tonics ‘Field Agent’ Coordinator, “These bikes are looking great with the Taylor’s Tonics decals in place. We’re definitely keeping one for ourselves at the brewery.”

Taylor’s Tonics has found success by avoiding re-invention of the wheel, instead innovating where beneficial whether it be in formulation, promotion, or nuts and bolts elements such as production and distribution. “Interestingly enough, the first person to accomplish the 22,000 mile trip around the world on a Penny-Farthing was a Briton named Joff Summerfield, and that was only four years ago,” explains Taylor, “So maybe our re-release timing of this classic velocipede is spot on!”

About Taylor’s Tonics Botanical Brewery
Founded in Santa Cruz, Taylor’s operates administratively in San Francisco. The company has produced a variety of products for private label and foodservice. More information regarding products, sales, distribution, representation, or investment can be found at www.TaylorsTonics.com or by emailing info@TaylorsTonics.com.