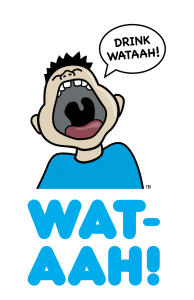 NEW YORK, May 29th, 2012/— After the success of the 2009 viral campaign, “Blame It On The SUG-AAH!”, WAT-AAH! is re-launching the campaign for the duration of the summer. The viral campaign will be spread across all digital platforms and the brand’s social media networks and will also include a photo contest where kids/teens can submit a photo stating how they “Blame It On The SUG-AAH!” with the chance to win cash prizes.

Current statistics show an alarming increase in sugar intake among kids and teens.  They also report that approximately 12.5 million (17%) Americans between the ages of 2 and 19 are obese.  As this generation of children grows older, it is estimated that by 2030 obesity rates among adults will be as high as 42%.  WAT-AAH! has found a way to successfully communicate these statistics to kids and teens through a fun and visual yet informative educational website.

“Blame It On The SUG-AAH!” will allow kids/teens and adults to explore and learn about the effects that sugar has on their bodies from the extreme reactions in kids’ moods, energy levels, to the even more serious effects like obesity and diabetes.

Founded by Rose Cameron in 2008, WAT-AAH! is a line of functional water designed for kids and teens, free of sugars or sweeteners of any kind and tastes like pure clean water. With Cameron’s 20+ years experience in strategic marketing and branding, she was able to crack the code in marketing to kids. Her objective behind WAT-AAH! was to let kids have fun, to educate them in a way they would relate to, to not be too preachy or too serious, and to convince kids that drinking water is as fun and cool as drinking sodas, energy drinks and juices. The brand has been successfully marketing this premise through advertising, events and sponsorship programs including major partnerships with Beyonce Knowles for the nationwide Move Your Body Flash Workout Event 2012 and WAT-AAH!’s Move Your Body 2012 Event, Nick Cannon and his Celebrity High Magazine, and NFL players such as Marques Colston and Patrick Peterson.