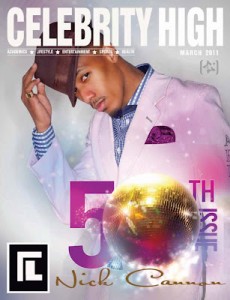 “It”s really cool to see all of these talented kids get the opportunity to showcase their creative skills,” says Nick Cannon, CEO of Celebrity High Magazine. “Kids are smart and have a voice – when given a stage, figuratively or literally, it helps give them the confidence they need to pursue their dreams.”

“WAT-AAH! has always stood for kids and promoting not only the importance of health and nutrition in their lives, but also their education, talent and creativity,” says Rose Cameron, CEO of WAT-AAH! “Because of this we are proud to work with Celebrity High Magazine and help further their cause with American teenagers, specifically the students of LA Unified School district. We are looking forward to be part of their magazine and the many exciting and fun events ahead!”

WAT-AAH! is a line of functional water for kids and teens free of sugar or sweeteners of any kind. Since 2008, the brand has been convincing kids to drink water as opposed to sodas or sugary drinks. WAT-AAH!”s mission is to make water their #1 choice for hydration. WAT-AAH! is the exclusive beverage partner for Beyonce”s ”Move Your Body” Flash Workout, supporting Michelle Obama”s Let”s Move! initiative. WAT-AAH! is available across the nation in over 7,500 stores/supermarkets as well as 2,000 schools/districts. http://www.wat-aah.com.