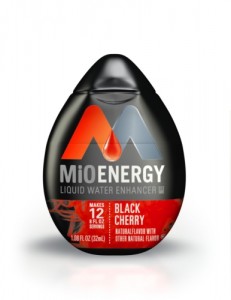 DALLAS — 7-Eleven, Inc. is giving away a free MiO Energy Black Cherry Liquid Water Enhancer, a fitting promotion for the largest retailer of single-serve bottled water.  The free 1.08-ounce full-sized bottle of MiO Energy Black Cherry (regularly priced at $3.99) will be available at participating 7-Eleven stores from 12midnight to 11:59 p.m. Tuesday, April 23, or while supplies last. No purchase is required to receive the free offer. You must be 18 or older to participate.

“Our customers love coupons and freebies, and they are giving us lots of great feedback and suggestions on our offers,” saidNancy Smith , 7-Eleven vice president of marketing. “We’re always looking to deliver on our guests’ wants and have partnered with MiO for this free offer as a result. People should check back often, both in-store and on the 7-Eleven app because you never know when one of these special offers might pop up.”

MiO Energy Black Cherry is a liquid water enhancer that contains 60mg. of caffeine per serving.  The recommended serving size is one squeeze (about half a teaspoon) of MiO Energy Black Cherry into 8 ounces of water or two squeezes for a 16-ounce bottle of water. Each 8-ounce serving of MiO-enhanced water contains caffeine equivalent to a 6-ounce cup of regular coffee.

In 2008, water surpassed soft drinks as the number-one beverage of choice in the U.S., according to Beverage Digest – an average of 44 gallons of soda compared to 58 gallons of water a year. While the water total includes bottled, tap, sparkling and enhanced waters, some beverage industry analysts think bottled water alone could overtake soft drinks soon. Bottled water has experienced year-over-year sales increases for more than 20 years.

A beverage destination for most of its customers (more than half include a beverage in their purchase), 7-Eleven is the number-one retailer of single-serve bottled water in the U.S.

7-Eleven, Inc. is the premier name and largest chain in the convenience retailing industry. Based in Dallas, Texas, 7-Eleven operates, franchises or licenses more than 10,000 7-Eleven® stores in North America. Globally, 7-Eleven has some 50,000 stores in 16 countries. During 2012, 7-Eleven stores generated total worldwide sales close to $84.8 billion. 7-Eleven has been honored by a number of companies and organizations recently. Accolades include: #2 on Forbes magazine’s 2011 list of Top Franchises for the Money; #3 spot on Entrepreneur magazine’s Franchise 500 list for 2012, #3 in Forbes magazine’s Top 20 Franchises to Start, and #2 in Franchise Times Top 200 Franchise Companies. 7-Eleven was named No. 3 on Fast Company magazine’s 2013 list of the “World’s Top 10 Most Innovative Companies in Retail.” Hispanic Magazine named 7-Eleven among its Hispanic Corporate Top 100 Companies that provide the most opportunities to Hispanics. 7-Eleven received the 2010 Retailer of the Year honor from PL Buyer because of the company’s private-label brand initiative. 7-Eleven is franchising its stores in the U.S. and expanding through organic growth, acquisitions and its Business Conversion Program.