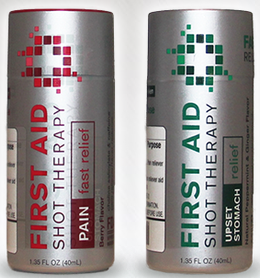 At least, that’s what Mary Page Platerink believes. A former executive at the Coca-Cola Co., Inc., Platerink is the founder and CEO of First Aid Shot Therapy (F.A.S.T.). Debuting in Seattle soon, F.A.S.T. has two SKUs — one targeted at pain, like headaches, and another that is supposed to relieve an upset stomach.

Using common OTC drug ingredients like ginger, caffeine, choline salycilate (a non-steroidal anti-inflammatory drug) and calcium carbonate, F.A.S.T. offers a liquid format of relief from maladies that are typically treated with medications like Goody’s or TUMS. The product is expected to retail for $2.99 per shot.

While unconventional in the U.S., Platernik said this is an underdeveloped category that’s succeeded in Japan. Sofinnova Ventures, an investment firm with 40 years of healthcare experience, rewarded Platerink’s faith last month with an investment that will help launch F.A.S.T. this August.

“We believe the consumer healthcare segment to be a vital growth area for healthcare investment today, and F.A.S.T. is well positioned to be one of the leaders in this field,” Garheng Kong, general partner of Sofinnova, said in a release.

Coca-Cola’s $4.2 billion acquisition of Vitaminwater in May 2007 shook the beverage industry’s landscape, with ripples still being felt today, and seized the attention of entrepreneurs and executives alike. This included Platerink, then Coke’s director of global customer strategy, who started exploring what creates this kind of enormous value.

In 2010, she met a Stanford University doctor, Pankaj “Jay” Pasricha, then the chief of the Stanford gastroenterology and hepatology divisions. Pasricha shared with her an idea for a pain and upset-stomach remedy, and Platerink created the product by meshing functionality with accessibility.

She said that while creating the product, she constantly thought about Coke’s idea of “the perfect pour” and 5-hour Energy’s mission to give consumers what they want.

F.A.S.T., a liquid shot packaged in a 40 mL plastic PET bottle, targets consumers aged 18 to 44, with ages 24 to 35 serving as its sweet spot. Platerink said that the metallic package looks and feels like aluminum to engage with younger consumers and to stand out in the over-the-counter drug aisle.

“Today, everything in the aisle looks exactly the same,” she said. “It doesn’t really engage with those consumers.”

Platernik said that Sofinnova has been a compatible business partner because of its extensive experience in the healthcare industry. She said that the investment firm has followed F.A.S.T. for more than a year and has supported the product’s development. She said that their presence, along with the advisory board featuring Peter Barton Hutt, the former general counsel for the Food and Drug Administration (FDA), has aided the tricky process of bringing a drug product into market; a different kind of challenge than launching a food or beverage product.

“We have to fully embrace the FDA in our products,” Platerink said.

Platerink also said that Sofinnova’s investment will help bring F.A.S.T. to a second test market after the initial launch in Seattle. She said that the location of the second test market hasn’t yet been determined. Also on board to help shepherd F.A.S.T. is Andy Steele, a sales and marketing consultant who has worked with many high-profile consumer brands, including Glaceau and Pretzel Crisps.