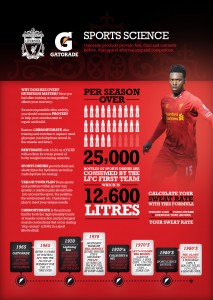 As well as Gatorade supplying product, the Club’s backroom staff will also have access to the Gatorade Sports Science Institute’s state-of-the-art laboratory and testing facilities which will provide support in maintaining the fitness and conditioning of the Reds.

Billy Hogan, chief commercial officer at Liverpool FC commented, “Gatorade is a leading sports nutrition brand worldwide and we are thrilled to be partnering with them as they continue establishing a dominant position in world football. Gatorade’s products have powered the world’s greatest athletes in all areas of sport for over 40 years and we look forward to working with them through the 2013/14 Barclays Premier League season and beyond.”

Gatorade Thirst Quencher was first developed in 1965 by researchers at the University of Florida to replenish fluid, carbohydrates and electrolytes that the athletes lost in sweat during athletic competitions. Since then, Gatorade has expanded its portfolio of products and has become a leading sports fuel provider for a number of sports across the world, including 83 football clubs.

“Liverpool FC is one of the world’s most renowned football clubs. This new partnership allows us to not only fuel the players, but we will also assist the fitness and conditioning backroom staff by providing additional sport science support for the team,” said Andrea Fairchild, Gatorade vice president, Global & Sports Marketing.

To help launch the partnership, Gatorade is giving fans a sneak peek at a Reds’ training session at Melwood. The video is available to embed via the link below:

Head of fitness and conditioning at Liverpool FC, Ryland Morgans welcomed the partnership commenting, “Performance nutrition is an integral part of the team’s training, match preparation and post-match recovery. Like us, Gatorade believes having the right product is vital.”

Morgans gives a behind-the-scenes tour of the fitness and conditioning set up at Melwood, introducing to fans the importance of sports nutrition and its role at Liverpool FC. The video is available to embed via the link below:

As a socially responsible business, Liverpool FC is proud of its heritage and plays a proactive role in its communities managing over 20 projects all-year round in education, social inclusion, health and sports development. Its contribution was recognised by the award of a Community Mark from Business In The Community.

Liverpool FC is a global brand and works with leading edge commercial partners around the world providing unparalleled commercial opportunities.

The Gatorade Company, a division of PepsiCo (NYSE: PEP), provides sports performance innovations designed to meet the needs of athletes at all competitive levels and across a broad range of sports. Backed by more than 40 years of studying the best athletes in the world and grounded in years of hydration and sports nutrition research at the Gatorade Sports Science Institute, Gatorade provides scientifically formulated products to meet the sports fueling needs of athletes in all phases of physical activity. For more information and a full list of products, please visit www.gatorade.com.