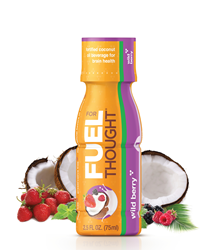 BLOOMFIELD, Conn. — Made with organic coconuts and fortified with medium chain triglycerides (MCTs), Fuel For Thought® is backed by 40+ years of scientific research. The easy-to-drink beverage is clinically proven to increase levels of ketones, which are the only alternative fuel source for the brain when glucose is not available or when an aging or impaired brain can no longer effectively utilize glucose.

Fuel For Thought was developed by a team of experts in clinical nutrition and metabolism as a “functional food”: a food with additional health benefits that may reduce disease risk and/or promote good health. The MCTs in Fuel For Thought are naturally metabolized into ketones, and published research has shown that increasing ketone production can help sustain brain health and cognition.

“Evidence supporting improved neurological function through the natural benefits of coconut oil has seen tremendous gains,” said Theodore VanItallie, M.D., co-founder of Fuel For Thought and chair of the company’s Scientific Advisory Board. “We’ve harnessed those benefits in a fortified beverage that provides a much simpler way to consume coconut oil and MCTs at the levels necessary to positively impact functions such as memory, clarity and energy.”

In addition to significant anecdotal evidence from those who have seen benefits from regular consumption, Fuel For Thought is being exclusively used in a clinical trial at the prestigious USF Byrd Alzheimer’s Institute in Tampa, Florida. The comprehensive trial, which began in 2013, is assessing the benefits of coconut oil and MCTs for individuals with mild to moderate Alzheimer’s disease. Fuel For Thought was chosen as the delivery method because of its potency, purity and palatability compared to coconut oil.

It is difficult to consume enough coconut oil in its natural form to maximize benefits, however, two servings of Fuel For Thought provide the benefit of MCT power from 15 coconuts. Offered in a Wild Berry flavor, the beverage is free of preservatives, cholesterol, trans fats or artificial additives. Each 1.25 ounce serving delivers two-and-a-half times the benefits of three tablespoons of pure coconut oil with only one third of the calories.

“Most people’s diets do not produce sufficient amounts of ketones to support the brain. Fuel For Thought is an easy and enjoyable way to significantly raise ketones levels and enhance neurological function,” said Cecilia Calhoun, Vice President of Fuel For Thought. “We have heard incredible feedback from our customers who experience the benefits of coconut oil in physical changes, improved memory, overall stronger brain function and higher energy levels—Fuel For Thought truly has helped improve their overall well-being.”

“Shortly after my wife started on Fuel For Thought she looked at me and smiled, she had recently been incapable of carrying on a conversation, laughing or even smiling any more. After about 7 months on Fuel For Thought, she reads the paper at breakfast, laughs at the comics, initiates conversations and can generally care for her own needs, she even boots up the computer and plays solitaire now,” according to Bernard N., Ocala, FL.

Prepackaged in recyclable bottles with two recommended servings, Fuel For Thought requires no preparation or refrigeration. Fuel For Thought is available for less than $2 per serving online through the Shop tab on the site. For more information, please visit http://www.FuelForThought.co or follow us on Facebook.

About Fuel For Thought

Cognate Nutritionals, makers of Fuel For Thought, has applied significant science and the highest quality ingredients to create a natural food-based option for people looking to address common health concerns and age-related cognitive decline. Headquartered in Bloomfield, CT, Fuel For Thought was spearheaded by Dr. Theodore B. VanItallie and a scientific advisory board of medical and research professionals bringing together expertise in ketones, lipids and metabolism to deliver innovation at the forefront of functional foods.