Everyone knows that a rolling stone gathers no moss (at least that’s what they’ve been telling us). Yet for Honest Tea, which has been rolling in its own right, the company has had no trouble picking up a different kind of green: cold hard cash. The Coca-Cola Co.-owned tea and juice outfit racked up $112 million in sales last year — up an impressive 27 percent over 2012 sales — and is positioning itself for similar growth in 2014 amid the launch of a new multi-serve “Refresher” line and a logo evolution that will gradually roll out across all Honest product lines.

Buoyed by sustained growth of its PET products and a 56 percent leap in year-over-year sales of its Honest Kids juice pouches, Seth Goldman, Honest Tea’s co-founder and TeaEO, told BevNET that the company’s first quarter numbers for 2014 are accelerating at a remarkable rate for a mature brand, and that he expects sustained growth throughout the year.

Yet while some might heed to the adage, “if it ain’t broke, don’t fix it,” Goldman, describes the new logo as more of an “evolution rather than a revolution.” Viewing the refresh as a timely way to take advantage of accelerated sales growth of individual product lines and retail channels, the new look will give greater uniformity to the broad range of Honest Tea products, Goldman said. Founded in 1998, Honest Tea added a line of juice drinks in 2004, and in subsequent years launched Honest Kids as well a brand of zero-calorie sodas called Honest Fizz.

“It’s not about taking the brand in a fundamentally different direction,” Goldman said. “It’s about how do make it a little more accessible and clear about who we are and what we’re doing. And how do we unify the business. We have these different parts of the business, and how do we keep it coherent across all lines where everything’s benefiting everything else.”

The new logo appears on Honest’s new “Refreshers,” a line of lemonade and limeade drinks which the company developed in close coordination with Whole Foods. In positioning and appearance, the new beverages bear some resemblance to similar offerings from Santa Cruz Organic. Packaged in 32 oz. glass bottles, the line comes in five varieties — Original Lemonade, Berry Hibiscus Lemonade, Mango Lemonade, Mint Limeade, and a “Half & Half” Lemonade and Tea — and contain 70 calories and 16-18 grams of Fair Trade sugar, depending on variety, per 8 oz. serving,. The drinks will launch this month nationally in Whole Foods, where the line will be sold exclusively through the end of 2014 with a price of $2.49 per bottle. 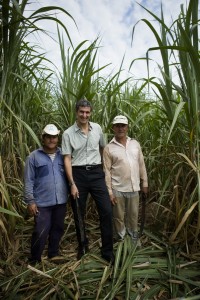 Goldman said that Honest Tea’s 16 oz. glass bottle offerings will be next up for the logo refresh, while its 16.9 PET bottles will get the update next year, likely in conjunction with the launch of a newly designed mold for the package. While the Refresher line is the first of Honest Tea’s to include Fair Trade sugar, Goldman said that he hopes to introduce the ingredient to the rest of the company’s products upon the growth and development of supply lines. Goldman recently returned from Paraguay, where the sugar is sourced, to get a better sense of the supply chain and how Fair Trade premiums are being used by farmers to pay for community development projects.

He noted that Honest Tea and Whole Foods had both been eager to use Fair Trade sugar in a new line of beverages, and he views the Refresher line as leading a potentially new wave of products using the ingredient, while educating consumers about Honest’s deep involvement with its suppliers.

“One of our jobs as a company is to help connect consumers more closely to the Earth, and how these products come to them,” Goldman said. “Being able to show people what’s involved in the growing of sugar and the harvesting of sugar, not just the plant, but the communities themselves… is something that I hope will enrich our consumers so that they, when enjoying these products, will understand this is more than just a typical lemonade.”

And while he called the Refresher drinks “sweeter than anything we’ve sold before,” he noted that the “a front-of-the-store lemonade line has a certain expectation around taste, and so we needed to deliver on that.”

“It definitely has fewer calories than the front-of-the-store lemonades that Whole Foods has traditionally offered, I’d say significantly less, but, on the other hand, more than what we’ve sold under the Honest banner,” Goldman said.

That banner might soon encompass a new line of food products. When asked if Honest Tea, which owns the trademark for “Honest Food,” is planning to launch a snack line this year, Goldman would only offer that “it’s too early to say.”