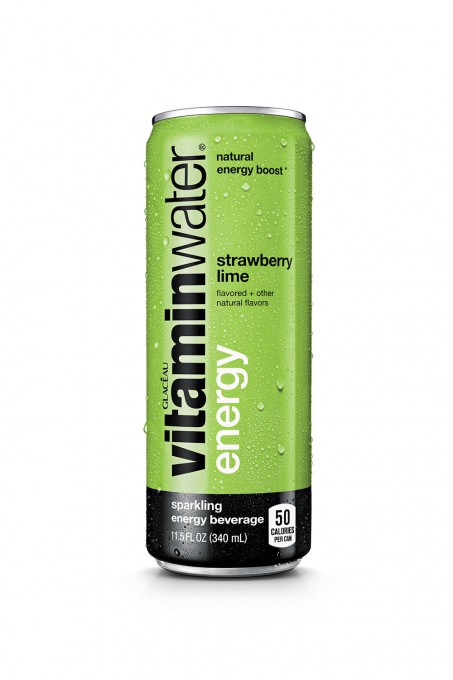 In the age of definable functions, vitaminwater has lost a good bit of its sheen. However, the Coke-owned brand has plans to stay relevant. Its latest foray: vitaminwater energy. Again.

Years after the release and eventual discontinuation of vitaminenergy and complementing its still-available tropical citrus flavor titled “energy,” vitaminwater announced Wednesday morning the release of vitaminwater energy, a line of lightly-carbonated beverages with green coffee bean extract. The beverage comes in four flavors — strawberry lime, berry-punch, orange-mango and raspberry-citrus — the last of which is available exclusively at 7-Eleven stores. The beverages, which have a suggested retail price of $2.29, are sweetened with a blend of cane sugar and stevia and contain 80 mg of caffeine and 50 calories per can.

The slim 11.5 oz. cans, which Coke displayed alongside a heap of other innovation at the NACS show in October 2013, prove vitaminwater’s willingness to adapt to the format of a firmly established category.

“There is a large contingent of people that like the functionality of energy drinks, but are looking for one that is straightforward and simple — one that’s going to give them a kick from a source they can understand,” Scott Hargrove, group marketing director for vitaminwater, said in a release. “vitaminwater energy has a clear-cut formula that gives people a natural energy boost so they can get the most out of their natural talents.”

Based on the contents of the press release, the company seems to be especially focused on targeting that ever-elusive bunch: millennials. In über-Brooklyn fashion, the release featured no capital letters until you reached the “About The Coca-Cola Company” section (freakin’ corporations, man) and mentions that the beverage could be a great option for “double-shifters,” the “all-night term paper writers” and the “i-really-want-to-do-well-on-the-first-day-of-the-new-jobbers.” These descriptors are accurate and humorous to trend-starting people aged between 18 and 29 or so, we’re led to believe.

The product’s on-the-fence positioning seems to place it between the synthetically-caffeinated side of Red Bull and Monster and the organic-energy side of Runa and Little Miracles.

NEW YORK — the vitaminwater® family is growing. the leader in the nutrient-enhanced water beverage category is sashaying into the energy category with vitaminwater energy™, a lightly-carbonated beverage that features a natural energy boost from green coffee bean extract.

vitaminwater energy™ features natural flavors and sweeteners without added preservatives or sodium. it provides a great option for those who could benefit from a natural energy kick, like the “double-shifters”, the “all-night term paper writers”, and the “i-really-want-to-do-well-on-the-first-day-of-the-new-jobbers”.

“there is a large contingent of people that like the functionality of energy drinks, but are looking for one that is straightforward and simple—one that’s going to give them a kick from a source they can understand,” said scott hargrove, group marketing director, vitaminwater®. “vitaminwater energy™ has a clear-cut formula that gives people a natural energy boost so they can get the most out of their natural talents.”

offered in a sleek 11.5 fl oz can, vitaminwater energy™ is available at convenience stores around the country in three flavors: strawberry-lime, berry-punch and orange-mango. a fourth flavor, raspberry-citrus, is available exclusively at 7-eleven stores. the beverage is sweetened with a blend of cane sugar and stevia leaf extract, and contains 80mg of caffeine (from green coffee bean extract) and 50 calories per can. suggested retail price is $2.29.

The Coca-Cola Company (NYSE: KO) is the world’s largest beverage company, refreshing consumers with more than 500 sparkling and still brands. Led by Coca-Cola, one of the world’s most valuable and recognizable brands, our Company’s portfolio features 16 billion-dollar brands including Diet Coke, Fanta, Sprite, Coca-Cola Zero, vitaminwater, Powerade, Minute Maid, Simply, Georgia and Del Valle. Globally, we are the No. 1 provider of sparkling beverages, ready-to-drink coffees, and juices and juice drinks. Through the world’s largest beverage distribution system, consumers in more than 200 countries enjoy our beverages at a rate of 1.9 billion servings a day. With an enduring commitment to building sustainable communities, our Company is focused on initiatives that reduce our environmental footprint, support active, healthy living, create a safe, inclusive work environment for our associates, and enhance the economic development of the communities where we operate. Together with our bottling partners, we rank among the world’s top 10 private employers with more than 700,000 system associates. For more information, visit Coca-Cola Journey at www.coca-colacompany.com, follow us on Twitter at twitter.com/CocaColaCo, visit our blog, Coca-Cola Unbottled, at www.coca-colablog.com or find us on LinkedIn atwww.linkedin.com/company/the-coca-cola-company.