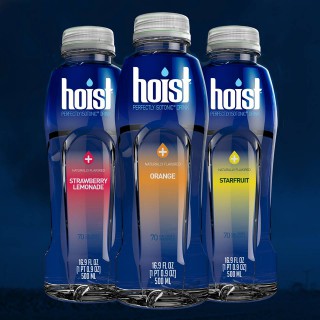 CINCINNATI — Hoist, the isotonic premium hydration beverage, is now being distributed in 212 Kroger stores throughout the Ohio divisions beginning this week.

Hoist is now available in a new 16.9 ounce bottle in three flavors: starfruit, strawberry/lemonade and orange after a re-branding led by Hoist in partnership with Michael Folan, President & CEO of Infinit Nutrition, based in Blue Ash, Ohio.

“We have spent the past four years shaping the Hoist formula and branding to create a premium hydration beverage,” said Kelly Heekin, president of Hoist. “We are thrilled with the opportunity to begin distribution in Kroger stores throughout Ohio and look forward to a future national distribution strategy.”

Kroger stores in the Cincinnati, Dayton, Columbus and Toledo regions, as well as Huntington, West Virginia and Athens, Ohio are now offering Hoist in their rehydration drink sections.

“Hoist is different from other sports drinks on the market in that it is an isotonic drink, having a similar carbohydrate and electrolyte concentration to the body, meaning that the body will absorb them faster than water alone,” said Folan, who is also an avid runner and Ironman competitor. “Because Hoist is isotonic, the body can start absorbing rejuvenating electrolytes from the first sip.”

For more information about the science behind Hoist, visit www.drinkhoist.com.