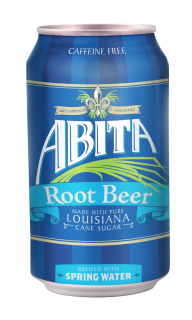 “Ever since we launched Abita beer in cans, people have been asking for our root beer in cans too,” said David Blossman, president of Abita Beer. “It’s the same great old-fashioned root beer you’ve loved for years, but now you can get it in portable, recyclable 12-pack aluminum cans. Abita root beer fans can bring it along to their next picnic, soccer game or pack it in their lunchbox.” Abita root beer will also continue to be sold in six-pack glass bottles.

Abita has been craft brewing their root beer for over 20 years. The drink is made with herbs, vanilla and yucca (which creates the foam), and it is sweetened with Louisiana sugar cane rather than the corn syrups that are the standard of the large soft-drink makers. The root beer is hot brewed rather than cold mixed, and there’s no caffeine – it would have to be artificially added to the soft drink, and that’s not the Abita way.

The soft drink is loved by both children and adults and also is a favored ingredient in both dishes and cocktails found on the menus of some of New Orleans’ finest restaurants. Some of Abita’s recipes and root beer cocktails can be found at www.abita.com.

About The Abita Brewing Company