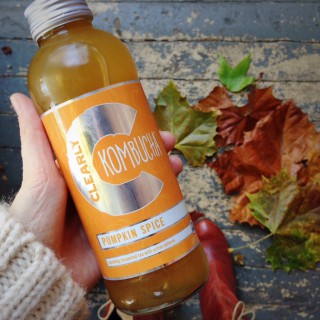 For consumers worldwide, fall evokes images of the changing of leaves and the gathering of firewood, but to most American consumers, the season directly denotes a need for pumpkin everything.

Clearly Kombucha’s Creative Director, Rachel Zarrow, comments: “At Clearly Kombucha, we differentiate ourselves by producing light and refreshing kombucha and by being a light and refreshing brand. We take our commitment to our customers very seriously and must respect and honor the fact that many of them love pumpkin spice. As a brand, we are not above the occasional foray into the cultural space, deemed by some as “basic.” The pumpkin spice latte has become a lifestyle choice for many of our customers and we are proud to help them embrace this custom in a new way.”

With the release of this flavor, Clearly Kombucha empowers its fans to embrace all of their preferences, whether they are “basic” or counter-culture. Although kombucha, traditionally a hippie-beverage for kumbaya circles has launched into the mainstream with distribution points in the conventional and convenience channels, there is still a major cultural divide between the hardcore “boochers” and these newer adopters in the kombucha category.

Clearly Kombucha seeks to bridge the gap between “basic” and “booch” with the release of this flavor. According to CEO Ali Zarrow, “We would never discriminate against customers who wear fleece-lined winter boots or enjoy scented candles and this is our way to show autumn-lovers that they, too, have a space in kombucha culture. Their voices are just as deserving to be heard, and we’re excited to be speaking up for them and their aspirations.”

Clearly Kombucha’s brew team has created just 25 bottles of Pumpkin Spice Booch and while most bottles are reserved for friends and family to enjoy with their Thanksgiving meals, the company is auctioning off one bottle. Loyal customers, brand-enthusiasts, and curious omnivores can bid for a bottle here: http://ebay.to/1MEj6F8

This brew continues to meet Clearly Kombucha’s strict quality standards and is a vegan and lighter alternative to the traditional Pumpkin Spice Latte. Clearly Kombucha hopes to launch this flavor into retailers next fall, given the enthusiasm and demand from their customers.

About Clearly Kombucha: Founded in 2009, Clearly Kombucha® is a California Bay Area company dedicated to brewing the most palatable and fun (not to mention authentic) kombucha possible. Clearly Kombucha brews a light and refreshing “booch” to reflect the company’s core belief that you come alive when you lighten up. Its refreshing taste, low sugar content, and light-hearted spirit are all reasons to celebrate. Lighten up!