Boasting 50 percent more protein, 30 percent more calcium and half the sugar content of traditional milk, Fairlife, an ultra-filtered milk brand distributed by the Coca-Cola Co., is rolling out nationally.

Launched in 2012, Fairlife was formed as partnership between Coke and Select Milk producers, a dairy cooperative. Using a patented cold-filtration process developed by a husband-wife team of dairy farmers, Fairlife products are created by separating the components of dairy milk, removing undesirable parts, such as lactose. Preferred elements, including calcium and protein, are combined and blended to create an enhanced version of milk. 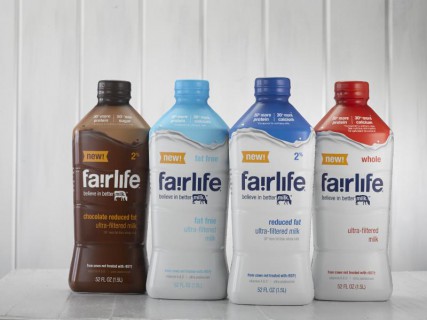 For Coke, which also markets and distributes Core Power, a milk-based protein drink brand owned by and created using the same process as Fairlife, it’s an opportunity to reach new consumers by offering what it perceives to be a healthier version of well-known beverage with built-in functionality. At a November analyst conference, Sandy Douglas, president of Coca-Cola North America, termed Fairlife as “the premiumization of milk.”

It also comes at a premium price: sold in 52 oz. bottles, Fairlife retails for approximately twice the price per ounce as regular milk.

Here is a press release announcing the national rollout of Fairlife:

CHICAGO, Feb. 3, 2015 /PRNewswire/ — Health and wellness start-up fairlife, LLC, is making a bold move in the dairy case with its introduction of fairlife® ultra-filtered milk: high quality milk that’s cold-filtered for 50 percent more protein, 30 percent more calcium and half the sugar of ordinary milk.[1] fairlife is meeting the needs of today’s health-oriented on-the-go consumers, with three out of four people wanting more protein in their diet.[2] fairlife is transforming a household staple to provide families across America with the extra nutrition they want without sacrificing the wholesomeness and great taste they expect from high quality milk. It’s all part of fairlife’s “believe in better®”, from better farming everyday to better care for its cows to better nutrition made with high quality milk.

The key to its groundbreaking ultra-filtered milk is fairlife’s patented cold-filtration that’s a true innovation in milk, enhancing its natural nutrition without the use of protein or calcium additives. fairlife also uses the high quality milk provided by its founding company Select Milk Producers, a progressive dairy co-op that is one of  the industry leaders in its commitments to milk quality, animal care and environmental sustainability.

“fairlife is a transformational innovation that retains the purity of real milk yet significantly improves its health benefits and taste,” says Mike McCloskey, a former veterinarian, active dairy farmer and CEO of the co-op. “Our patented filtration concentrates the best of milk’s natural nutrients, like protein and calcium, while filtering out the lactose and reducing the sugars – we’re very excited to be taking a superfood and making it even better, with more goodness than ever.” fairlife is milk, pure and simple, without any protein powders or nutritional supplements added.

“As dairy farmers and parents of four, we believe that milk could and should be even better,” adds Sue McCloskey, who co-founded fairlife with her husband Mike. With a few other families, the two own the flagship Fair Oaks Farms dairy in Indiana. “With fairlife, we’re bringing families everywhere great tasting, convenient, high quality, simple nutrition from real food.”

Not only will people feel better drinking fairlife because of its superior nutrition, but they can feel better about how it’s produced, too. Every one of the family-owned dairy farms that make up Select Milk Producers believes that producing a better milk can only be accomplished by doing it in a better way. Dedicated to humane animal care practices, they produce some of the highest-quality milk in the world in a way that’s better for the cows, better for the earth and better for people. In fact, fairlife is fully traceable back to the dairies the milk comes from, providing unparalleled safety reassurance.

fairlife ultra-filtered milk is rolling out nationwide now thanks to distribution from The Coca-Cola Company’s Minute Maid Division. The product is available in fat-free, reduced fat (2%), whole and chocolate reduced fat (2%) varieties. To learn more about fairlife, visit fairlife.com/media and connect with us on Facebook.

About Select Milk Producers, Inc.
Select Milk Producers, Inc. was formed in 1994 by a group of dairy producers with high-quality milk and efficient dairy farm operations. The Select common goal is to provide the highest-quality product in the marketplace and do so with the highest level of service. Select members are based primarily in Texas, New Mexico and the Midwest. Altogether, Select is the 5th largest dairy cooperative in the United States. The co-op’s flagship farm, located in Fair Oaks, Indiana, is open to the public and is recognized as an innovator and leader in sustainable agriculture.

About fairlife, LLC.
fairlife, LLC is a health-and-wellness company that produces and markets premium-quality, value-added nutrition products that start with the best milk from independent American family farmers committed to sustainable and traceable agriculture. fairlife, LLC’s patented cold filtration process filters natural milk to increase protein and minerals and decrease lactose and sugar. In 2012, Select Milk Producers entered into a partnership with The Coca-Cola Company to form fairlife, LLC. The Coca‑Cola Company is the distribution partner for the products that fairlife, LLC, creates, market and sells. The company owns and operates its own state-of-the-art plant in Michigan. fairlife, LLC, also produces Core Power, a great-tasting high protein drink created for fitness enthusiasts and on-the-go protein seekers.

[2] U.S. Consumers Want More Protein In Their Diets And Look to A Range Of Sources For It, NPD Group: https://www.npd.com/wps/portal/npd/us/news/press-releases/us-consumers-want-more-protein-in-their-diets-and-look-to-a-range-of-sources-for-it/