AUSTIN, Texas, May 5, 2015 /PRNewswire/ — HYDRIVE Energy Water today announced its partnership with 20th Century Fox to support the highly-anticipated Paul Feig comedy “Spy,” which is set for a June 5theatrical release. The nationwide campaign will bring Melissa McCarthy and the film’s all-star cast to the shelves of leading retailers through creative, co-branded point-of-sale elements and special offers beginning in late April.

To celebrate the partnership in true “Spy” fashion, HYDRIVE is giving one fan the opportunity to accept the Ultimate Spy Mission in Washington D.C. and be given unprecedented insight into the life of a CIA spy from a former Intelligence Officer.

The Ultimate Spy Mission Sweepstakes, which launches today at www.hydriveenergy.com/SPY, features a private tour of the District’s spy hotspots and landmarks, as well as an inside look at the International Spy Museum – where a thrilling mission tasked of decrypting classified conversations, penetrating a high-security compound, and evading capture awaits. 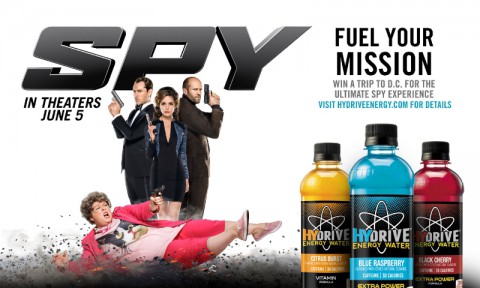 “HYDRIVE Energy Water drinkers are big fans of blockbuster comedies, so we jumped at the opportunity to partner with 20th Century Fox to promote ‘Spy’, the summer’s most anticipated comedy,” said Thomas Oh, senior vice president of marketing at Big Red, Inc. “HYDRIVE is very proud to be able to bring the stars of ‘Spy’ and the Ultimate Spy Mission Sweepstakes to retailers nationwide.”

“With any partnership, we look for brands that strongly appeal to the film’s core audience. HYDRIVE Energy Water is the ideal beverage brand to drive awareness for ‘Spy’ at retailers and online,” said Zachary Eller, senior vice president, marketing partnerships and promotions at 20th Century Fox. “This partnership is a perfect fit for ‘Spy,’ 20th Century Fox and HYDRIVE alike.”

Additionally, HYDRIVE and 20th Century Fox will collaborate on social and digital media content to drive awareness of the partnership. A digital video series “The Untrained Spy” will debut on HYDRIVE’s social media channels on May 18.