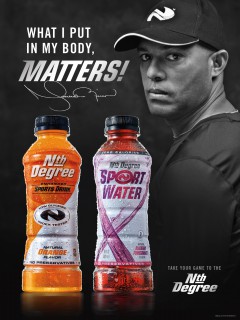 Edison, NJ, – (May 7, 2015) – Nth Degree Innovations is proud to welcome Mariano Rivera to the Nth Degree Team. Mariano will be featured in a new advertising campaign set to launch in the New York metro area in early June. He will also have a minority stake in the business. Known as the best closer to ever play the game, Mariano is a 13-time All-Star and five-time World Champion. He is MLB’s career leader in saves and games completed, has won five American League Rolaids Relief Pitcher and three Delivery Man of the Year Awards, and finished in the top three in voting for the American League’s Cy Young Award four times. Proof that all through his career, Mariano has always taken his game to the Nth Degree.

Nth Degree founder and CEO Peter Strahm says that Mariano is the perfect face of the Nth Degree brands. “No one exemplifies taking his game to the Nth Degree like Mariano. Beyond that, we stand for the same things … we’re both advocates of healthy lifestyles and fair play. He’s what these brands need to help put them over the top and drive both sales and distribution.” According to Mariano, teaming up with Nth Degree was an easy choice. “These brands are the perfect complement to the healthy, active lifestyle I choose to live and are a natural fit for me.”

Bob Todaro, COO of Nth Degree, concurs: “Unlike many sports drinks that contain artificial ingredients, our brands use natural ingredients, with no artificial colors, preservatives, flavors or sweeteners. In fact, the Nth Degree Enhanced Sports Drink is sweetened with a natural low-glycemic sweetener (Palatinose) made from sugar beets. It’s loaded with B vitamins and electrolytes. Perfect to drink before, during or after physical exercise.”

Nth Degree Innovations was launched by Peter Strahm and Bob Todaro, two beverage veterans whose relationship goes back 35 years to when they were kids in Staten Island, NY. Both were part of the Snapple revolution, and since then Bob and Peter have continued their successful beverage careers on separate paths with great companies. Peter helped put Jones Soda on the map as their VP of Sales in 1998 and 1999 before moving to Red Bull North America where he spent the next 10 years as the VP/GM for the East Region. Bob continued to work with exciting brands that fit the changing lifestyles of consumers, most notably at Cadbury Schweppes Americas Beverages. In addition, Peter is also CEO of Drink King Distributing Co. Inc., a beverage distribution company dedicated to delivering some of the best beverage brands to the tri-state area.