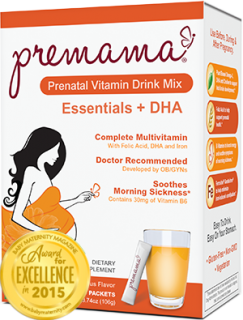 In September, women’s maternity wellness brand Premama announced the completion of a $1.4 million capital raise led by early stage investment group Cherrystone Angels Group. The announcement followed what had already been a busy year for the Providence-based brand, which added lactation and fertility supplements to complement its Premama Essentials line of prenatal vitamin drink mixes in July. Now, the investment arrives as Premama looks to maintain its position at the forefront of the niche pregnancy-focused beverage space – one that’s seen several newcomers show up since Premama first hit the market in 2012.

“In 2014, when we were developing these new products and we had just launched nationwide into Target, we realized that to go into these big retailers we needed capital,” says Premama founder and president Dan Aziz. “Our idea had already been proven. We already had customers, tens of thousands of subscribers to our newsletter and getting thousands of sample requests per month. We knew we had a product that solved a problem, so this was really more of growth funding than seed funding.”

Premama now has placements at several of those bigger retailers, including CVS, H-E-B, and Buy Buy Baby. And while the bulk of prenatal supplement sales are in retailers like Walgreens, Walmart, Target and CVS, Aziz also pointed to natural channel outlets like Whole Foods (where it has some regional distribution) and Sprouts Farmers Markets as presenting opportunity for his product.

“We’ve positioned our products so they can also be sold at a Whole Foods,” Aziz adds. “They’re non-GMO, vegetarian, gluten-free and naturally flavored.”

Premama’s chief marketing officer, Jamie Schapiro, will also embark on an “aggressive marketing effort,” with the company’s cash infusion, as the targeted category his brand plays in has started seeing new ready-to-drink entrants like Bundle Organics, Healthy Mama and Bump Water, the latter of whom recently entered Whole Foods’ Brooklyn location. Happy Family, which has been selling high-end, organic baby food has also entered the segment with the recent launch of its Happy Mama Prenatal collection.

“The maternity wellness space, specifically with drinks and beverages, is really on the rise,” Schapiro said. “Women are seeing there are alternative ways to get these vitamins and supplements.”