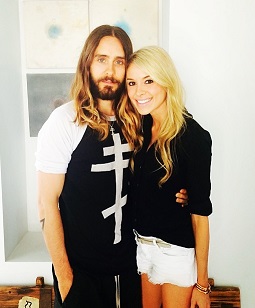 When BevNET first broke news of Suja’s latest $21 million round, new board member Rick Hess was a pretty strong indicator that some flash was about to enter the picture.

As a co-founder and managing director of Evolution Media Capital — a joint investment venture with production house Participant Media and Creative Artists Agency, one of Hollywood’s biggest talent agencies — Hess, by job description alone, brought some Hollywood flair. Apparently, he brought some talent with him as well.

Today Suja revealed — in a press release — that other investors besides Evolution Media include some of the best-known actors on the planet, including Leonardo DiCaprio, Jared Leto, and Sofia Vergara.

Suja executives and other investors — including ACG and Boulder investment Group– had been uncharacteristically buttoned-down following the revelation of the new cash heading into the company.

Apparently, they were just waiting to raise the curtain on their new, star-studded investor base.

Suja Juice Co. Closes A New Fundraising Round In Excess Of $20 Million

SAN DIEGO, Feb. 5, 2015 /PRNewswire/ — Suja Juice Co., the leader in cold-pressured (otherwise known as HPP High Pressure Processing) juice, today announced the close of a financing round in excess of $20 million dollars.  Suja is also pleased to announce its newest investors, Evolution Media Partners (Evolution), a joint venture with TPG Growth, Participant Media, and Evolution Media Capital (EMC), the latter of which is a merchant bank formed in 2008 in partnership with Creative Artists Agency (CAA). Additional investors in this newest round of funding also include Leonardo DiCaprio, Jared Leto and Sofia Vergara.

“As someone constantly on the go, I have come to count on Suja not only to help me maintain my health and energy but to provide a great tasting fun alternative,” says Leto. “I am passionate about discovering brands that I not only actually use and enjoy, but also holistically believe in, and Suja is a great exemplifier of this search.”

Suja, which was just named by Forbes as the number two “Most Promising Company” in America, climbing up a spot from its #3 ranking in 2014, is coming off of a great year of top-line growth, brand building and capacity expansion.  Suja continues to lead the tremendous growth of the HPP organic juice category and is now seeing the same success that it saw last year in the natural foods channel as it is in the traditional grocery channel. Funds from this investment round will be used to support the expansion of Suja’s manufacturing facility and its capacity as the company anticipates doubling revenues in 2015.

“Since Suja’s launch in May 2012, the brand has been blessed with an authentic and loyal fan following,” says James Brennan, Suja co-founder. “We are lucky enough that some of these fans happened to be Hollywood’s most respected celebrities and wanted to do more than just enjoy the juice but actually be part of the Suja Juice movement. By bringing in the likes of CAA and this prominent group of individuals, it serves as great brand validation and reinforces that we really have created something special at Suja.”

Suja Juice(TM) began from a shared dream to help people transform their lives through conscious nutrition. The three handcrafted lines of cold-pressured juices, Suja Classic(TM), Suja Elements(TM) & Suja Essentials(TM) are Certified Organic and verified Non-GMO by the Non-GMO Project. All juices and smoothies are cold-pressured using High Pressure Processing (HPP) to kill any harmful bacteria and preserve maximum nutrition and taste. Suja Classic(TM), packed with pure fruits and vegetables, is the convenient way to drink nutrients the body needs and maintain overall health. The Suja Elements(TM) line is packed with vital nutrients, omegas and antioxidants. For each bottle of Suja Elements(TM) purchased, 20-25 cents is donated to an important cause. In 2014, Suja introduced its newest line, Suja Essentials(TM), for anytime, anywhere refreshment. Suja Essentials(TM) delivers functional refreshment with vital nutrients your body needs like antioxidants & proteins.  With a wide range of cold-pressed organic offerings, Suja(TM) has a juice for every lifestyle. Suja can be purchased through SujaJuice.com, Amazon.com, as well as Natural and select National Grocery chains.

Evolution Media Partners (Evolution) is a joint venture between Evolution Media Capital (EMC), TPG Growth, the middle market and growth equity investment platform of global investment firm TPG, and Participant Media, the global entertainment company founded in 2004 by Jeff Skoll.  Evolution will partner with and invest up to $350 million in growth-stage media, sports, and global entertainment companies.  EMC is a merchant bank focused on the media and sports industries, formed as a partnership with Creative Artists Agency (CAA), and offering investment advisory, asset management, industry research, and capital-raising services.  In the media rights space, EMC provides a wide array of advisory services including strategic analysis, valuation and negotiation of media rights and regional sports network planning and operational strategy.