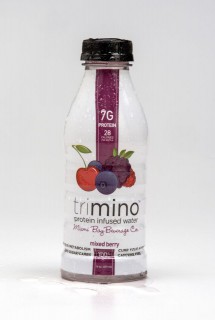 BRANFORD, Conn. (June 18, 2015) — When New Haven, Conn., television station WTNH heard about the rapid growth of trimino protein-infused water, developed by three local fathers, they sent a reporter to investigate. Initial conversations with founder Robert J. Leary resulted in a story that reinforced the brand’s availability in 3,000 stores in 21 states, including 400 in Connecticut alone.

Leary of the Miami Bay Beverage Co., LLC (MBBC), says the exposure reinforces sales in the local market and is the jumping off point for major expansion in the northeast. With new distributors including DeCrescente Distributing of Mechanicville, N.Y., and Northeast Beverage of Orange, Conn.,  and West Greenwich, R.I., trimino is poised to explode in the greater New England area.

Expansion plans call for roll-out in Providence, Albany and Boston by the middle of the summer with southeast expansion thereafter. This is on top of strong penetration in the New Haven, Fairfield County, Hartford and Westchester County markets. MBBC will augment this with continued penetration in and around these major metropolitan markets in the northeast.

According to Peter J. Dacey, CEO of MBBC, “We’ve been having success in these markets on our own but to be teamed up with high quality professional distribution resources will accelerate our growth in the region.”

You can see the news story here:

Learn more about trimino at www.drinktrimino.com