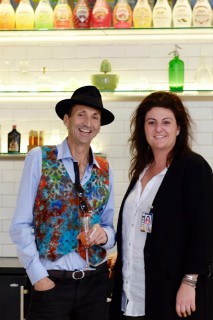 Califia Farms’ mission is to create delicious plant-powered foods and beverages that provide mindful nourishment – including Almondmilks, Creamers, Cold Brew Coffees, Horchatas, and Agua Frescas – and is a leader in the exploding plant-based food and beverage revolution.

The Company, which prides itself on its partnership with California farmers, chose the DTLA Arts District because it fits with the company’s identity as a positive disruptor in the beverage industry. Its decision to locate in Los Angeles helps extend the city’s – and Southern California’s – growing reputation as an incubator for natural foods.

“Innovation, sustainability and California roots are core to Califia Farms. Our new offices reflect this in both their design and in their location in one of the country’s most exciting creative incubator districts: DTLA Arts District,” said Greg Steltenpohl, CEO of Califia Farms. “We look forward to joining this remarkable community and to the opportunity of working in an area that, by its very nature, will reinforce the Califia Farms team’s amazing creativity as it focuses on bringing delicious and healthy, planet-friendly beverages to market.”

Named “Brand of the Year” in 2015 by BevNet, Califia Farms has doubled its sales every year since 2010, and is one of the fastest growing nut milk brands and the leading Ready-to-Drink coffee brand in the natural channel[1]. Califia Farms is headed by beverage industry legend Greg Steltenpohl, who received the 2016 Specialty Foods’ Business Leadership Award and who has been named one of the Top 50 Disrupters in the beverage industry two years in a row.

About Califia Farms (pronounced “Cal-lah-fee-ya,” like California)Inspired by the bounty of California, Califia Farms’ (www.califiafarms.com) mission is to innovate delicious plant-powered foods for mindful nourishment. The Company is a leader in the revolution to de-commodify the food and beverage industry by creating innovative, healthy and great-tasting premium beverages that make it easy for consumers to go ‘plant-powered’ and dairy-free, without compromise. Founded in 2010 by a farmer’s co-operative based in the San Joaquin Valley and headed by beverage visionary Greg Steltenpohl, Califia Farms is a uniquely California company. Its Bakersfield, Calif. manufacturing plant, which uses artisanal processes to create healthy and delicious plant-based beverages, is eco-friendly, energy efficient and repurposes more than 90 percent of its post-production byproduct. Califia Farms is one of the fastest-growing natural beverage companies in the U.S., as well as the leading brand in the natural products coffee drinks and nutmilk categories. In 2015, Califia Farms was named “Brand of the Year” by BevNetand a “Breakout Brand” by Beverage World.