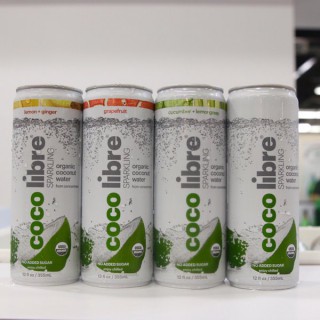 “We were first to bring organic coconut water to U.S. shoppers, first to market coconut water plus protein, and now we’re focused on coconut water’s broader nutritional promise,” said Candace Crawford, CEO of Maverick Brands, Coco Libre’s parent company. “We’ve been thinking a lot about consumers and their needs. We’ve asked who might want coconut water nutrition in a different experience and package. We thought about those channels where coconut water beverages would be welcome but still hasn’t found a way in. That’s where our new Sparkling Organic Coconut Water line, for example, came from—something that works as an anytime refresher and also as a cocktail mixer. We want to grow the number of ways people can choose to bring coconut water nutrition into their routine, day and night.”

“Coco Libre has previewed the innovations to key retail customers over the past several months, and the response has been overwhelming,” said John Slee, Vice President of Sales for Coco Libre. “There’s so much excitement from retailers about some real innovation into the coconut water category. It’s exciting to be first to market and bring real innovation that will bring sales and new customers to their coconut water sets.”

Coco Libre has additional products in the R&D pipeline, to be announced later this year, that will further differentiate the company’s offerings and excite customers and consumers.

Coco Libre products, made in the U.S.A., are formulated from the foundation of its signature Organic Coconut Water, known for delicious flavor with no added sugar, certified USDA organic, OU kosher, gluten free and Non-GMO Project Verified. Every product extends Coco Libre’s brand promise to “liberate your thirst.” The company will be sampling the new products at Natural Products Expo West 2016, Booth #5306.

Coco Libre’s flagship Organic Coconut Water is the nutritional foundation for a growing family of purposeful beverages. Coco Libre is a 2015 NCW Eco-Excellence Award winner and a finalist for Best New Product Line Extension at the World Beverage Innovation Awards 2014. Coco Libre beverages, made in the U.S.A., are available in grocery, natural, specialty and online retailers in the U.S. and Canada. To learn more visit CocoLibre.com, Facebook.com/CocoLibreOrganic, twitter.com/CocoLibre and Instagram @CocoLibre. Liberate your thirst.™