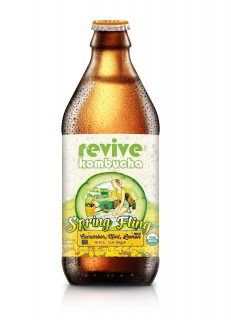 Revive Kombucha is set to launch a new 12 oz. bottle size and revamped labels, both of which are intended to support the company’s national expansion and broaden the brand’s appeal among retailers and consumers, according to founder and CEO Sean Lovett.

In an interview at BevNET Live Winter 2016, Lovett said that the past year “was about us becoming a national brand from being a regional brand, and the stubby bottle was our route to market with that.” Amid the expansion, however, the company came to realize that the packaging needed an upgrade, particularly to enhance its positioning as a premium-priced offering.

“We wanted to establish a better shelf presence,” Lovett said in a follow-up interview. “We noticed that was potentially a price perception issue. We’re at the price ceiling of the category, yet we were the smallest package. We wanted to adapt quickly and design a package that had a better shelf presence and better represented [its] value, yet still keeping the dollar price point where we had it.”

The result was the development of a new custom-molded 12 oz. bottle that will replace the 11 oz. size. The taller bottle will be more visible and is at the same shelf-height as competing brands, according to Revive. It will also maintain the $3.49-3.99 price as the 11 oz. bottle; Revive absorbed the cost of an another ounce of liquid and increase in package cost, Lovett said. Meanwhile, the company went smaller with another package, replacing its 64 oz. growler with a new 60 oz. size. Revive will begin production on the new bottles at the beginning of 2017.

Revive’s new labels were designed to focus on three elements: the brand, the name of the product variety and the flavor. The labels come with a larger and more prominently featured brand name as compared to the old version, while maintaining core elements that have defined the brand’s vibe. The increased size of the brand name will allow consumers to identify Revive “from the across the room,” and better aligns its product mix, according to Jordan Alport, who helped lead the redesign effort.

“I think the set is much more unified now and looks more like a family and there a little more visual continuity just in terms of the geometry of the label colors and things like that,” Alport said. 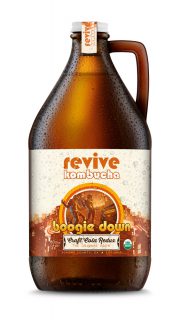 Revive has also rebranded its top-selling variety, The O.G., which is now called Boogie Down. The new look retains the musical vibe of The O.G. and features imagery of people dancing amid a downtown city setting.

Although the company made a strong push in new markets in 2016, including the Northeast and Mid-Atlantic, Revive is not planning to enter any new regions next year. Instead, the company will focus on going deeper in existing markets. Lovett said that Revive is focused on coastal distribution and a natural channel strategy, noting that “California continues to be our number one priority; it’s our home turf.”

“This year especially taught us that the best thing we can do is leverage our strength. We’re the number one kombucha brand in [Northern California] for quite a few years now,” he said in the BevNET Live interview. “We’ve done that through engaging our community and focusing on velocity in stores. Our goal is to stay true to those same principles as we expand.”

Revive operates using a hybrid distribution model of DSD and national wholesalers, including KeHE and UNFI. The brand is carried in five Whole Foods regions: Northern California, Southern California, Pacific Northwest, Rocky Mountains and Mid-Atlantic. Although Revive has yet to crack Whole Foods Northeast region, the company recently picked up a big win with new placement at Fairway stores in metro New York.

Lovett noted that 2016 “clearly was a tipping point nationally as far as awareness within retailers.” Yet while some kombucha brands, including Live Kombucha and Brew Dr. Kombucha have emerged in the conventional channel over the past year, his belief is that “it’s still a little early in conventional to invest a lot of money,” and that it’s “more of a 2018 play.”

Revive’s current path was supported by a capital infusion earlier this year. According to a May filing with the U.S. Securities and Exchange Commission, Revive had been attempting to raise $3.5 million in new funding. The filing indicates that, at the time, the company pulled in over $2.1 million of its target goal. It also lists five directors of the company, including Lovett and his wife Rebekah, Bentley Hall, the CEO of grocery delivery service Good Eggs, Peter Henig, a managing partner of Greenhouse Capital, a private equity firm focused on investment in the healthy consumer and sustainable living space and Ilya Nykin, a co-founder and managing director of Prolog Ventures, which provides venture capital to health-focused CPG companies. In 2014 Prolog invested in fast-growing sparking water and soda company Spindrift.

Lovett declined comment about the new funding, which came amid a spate of investment in kombucha brands in 2016. The past year saw a $15 million raise by Health-Ade, which was led by CAVU Venture Partners, two funding rounds for Humm Kombucha, and Anheuser-Busch InBev’s venture capital arm Zx Ventures investing in alcoholic brand KomBrewCha.