SEATTLE, Wash., December 12, 2016 – nutpods, the dairy-free alternative to half and half,  made from almonds and coconuts, recently closed their Series A round with Circle Up.  After only 19 months on the market, nutpods has received national recognition of its products thanks to its rapid rise on Amazon.com and retail sales velocity, and will use the funds from the round to further build their brand’s national distribution footprint and expand their team in 2017. nutpods is frequently reviewed and ranked as the highest quality, clean plant-based creamer on the market.

nutpods is a small family owned company that has navigated a path to success in the face of much larger competitors such as Silk, So Delicious (both owned by White Wave) and Califia Farms. The company has focused on product quality and superior customer service which has created a cult-like following. Customers on Amazon describe the product as ‘amazing! Thick like real cream’, ‘everything I hoped it would be’, ‘delicious’, and a ‘fabulous alternative’.  As evidenced by their highly engaged and passionate fan base, nutpods has recently surpassed industry leaders Coffee-Mate and International Delight in the number of consumer reviews, with more than 2,100 on Amazon that average 4.3 out of 5 stars. 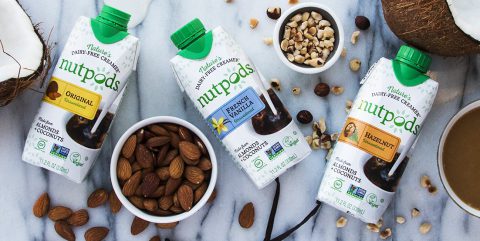 Lisa Feria, CEO of Stray Dog Capital, one of nutpods’ recent investors, attributes the future potential growth of the company to timing, quality, and leadership: “The market for cleaner ingredient decks and plant-based, healthier foods is large and growing.  nutpods is well positioned to address this consumer need with superior products that delight those who try them.  Also, we found that Madeline Haydon, the nutpods CEO, is well suited and ready to spearhead the growth and evolution of the brand.  She is smart, savvy and diligent in her ability to spur brand growth and reach thousands of consumers.”

Melissa Hartwig, co-founder of Whole 30, also joined this round as an investor:  “I have yet to see any product go as viral as nutpods with my Whole30 community.  People are bringing their containers to their local coffee shops, sharing it with friends and featuring it in their Instagram posts.  I’m thrilled to be part of the nutpods healthy dairy-free movement and I’ll proudly support the company with all of my resources.”

nutpods’ superior quality has attracted not only coffee consumers but roasters as well. Crowned in 2015 by Roast Magazine as Micro-Roaster of the Year, Portola Coffee Roasters of Orange County, CA is impressed by the products.  Christa Dugga, Portola’s owner, remarked: “I have never had an alternative creamer product that is so full and with such a high viscosity as nutpods.  It has the mouth feel of traditional half-and-half.  It steams really well and makes an amazing breve!”

nutpods was born out of a need for a delicious, clean ingredient alternative to half-and-half. Founder and CEO Madeline Haydon is a dairy-intolerant mom of two who couldn’t wait any longer for a product that she could feel good about adding to her morning coffee and tea and using in cream-based recipes. Launched in late 2013 with a successful Kickstarter campaign, nutpods’ 11.2oz cartons came to market in May 2015 on Amazon.com and in Seattle area retailers and has been on an upwards growth trajectory ever since. Selected as the creamer of choice for 2016 Holistic Holiday at Sea  (cited by National Geographic Traveler as “one of the 100 best worldwide vacations to enrich your life”) and named one of the innovative beverages of 2016 by the Specialty Food Association, nutpods is a member of the trade group Plant Based Food Association and is backed by the following quality organizations: The Vegan Society, Whole30, the Gluten Intolerance Group (Gluten-Free), Orthodox Union (Kosher), and the Non-GMO Project. Learn more at http://www.nutpods.com.