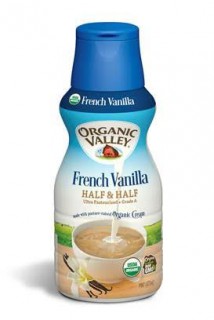 LA FARGE, WI – February 9, 2016 – Organic Valley plain Half & Half is well established as the number one organic half & half in the U.S. Now the nation’s largest farmer-owned organic cooperative is introducing two new flavors to its Half & Half line-up: organic French Vanilla and organic Hazelnut.

These products start with Organic Valley’s high quality, pasture-raised milk and cream. These are blended with organic, fair trade cane sugar and French Vanilla and Hazelnut flavors. Organic Valley Flavored Half & Half comes in a convenient 16-oz PET bottle with an easy-pour flip cap designed to fit into the refrigerated conventional creamer set. These new offerings give consumers the choice of a premium coffee accompaniment that is equal to their favorite coffee. Retailers will be interested because: 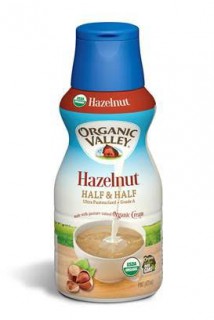 The one and only organic flavored half & half will appeal to anyone wanting to enhance their coffee experience with great taste and premium quality – indulging themselves without compromising on ingredients.

“We know that people are seeking out great coffee these days,” said Lewis Goldstein, Organic Valley’s Vice President of Brand Marketing. “Why shouldn’t they have the very best flavored half & half to go with it?”

Organic Valley Flavored Half & Half will be available on shelves in March. SRP: $3.49

Hi-resolution photos attached, and also available by request from mickella.geary@organicvalley.coop.

Organic Valley is America’s largest cooperative of organic farmers and one of the nation’s leading organic brands. Organized in 1988, it represents approximately 1,800 farmers in 36 states. Focused on its founding mission of saving family farms through organic farming, Organic Valley produces a variety of organic foods, including organic milk, soy, cheese, butter, spreads, creams, eggs, and produce, which are sold in supermarkets, natural foods stores and food cooperatives nationwide. With its regional model, milk is produced, bottled and distributed right in the region where it is farmed to ensure fewer miles from farm to table and to support our local economies. For further information visitwww.organicvalley.coop. Organic Valley is also on Twitter (@OrganicValley) and Facebook (www.facebook.com/OrganicValley).