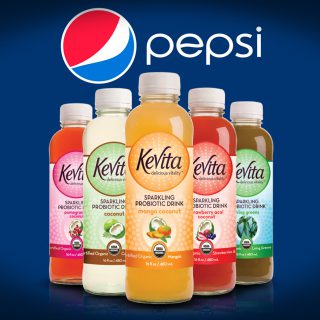 After months of speculation, PepsiCo announced today in a press release the purchase of KeVita, the sparkling probiotic beverage company in which it has held a minority investment stake since 2013, for an undisclosed sum.

“I am pleased to welcome KeVita into the PepsiCo family. Under the leadership of CEO Bill Moses, KeVita has become an innovative, high–growth brand that is transforming the functional beverage space,” said Chris Lansing, general manager and vice president, PepsiCo Premium Nutrition, in a press release. “This announcement is further evidence of PepsiCo’s focus on delivering Performance with Purpose by continuing to evolve our health and wellness offerings to meet consumers’ changing needs.”

Sources close to the deal have put the purchase price at between $200 and $300 million.

KeVita will retain independent control over its production and bottling operations based in Oxnard, Calif. Sources confirmed that Bill Moses, CEO, and his co-founder Chakra Earthsong would each remain involved in the company in undetermined roles after the deal is closed.

“Joining the PepsiCo family will give us an opportunity to extend KeVita’s trend-forward beverages to a broader audience, while staying committed to our core values,” said Moses in a press release. “We’re looking forward to more consumers experiencing the KeVita brand and to leveraging PepsiCo’s marketing and distribution capabilities.”

The acquisition indicates a significant step forward in Pepsi’s mission to broaden its healthy beverage brand portfolio, which includes Naked Juice and O.N.E. Coconut Water, in order to drive future growth in the face of the continuing decline in popularity of carbonated soft drinks. The soda giant had previously made a minority investment in KeVita through its Naked Emerging Brands, and has overseen the brand’s product distribution through its refrigerated truck operation. Pepsi has also had a board observer seat at KeVita for several years.

According to statistics provided by market research firm IRI, retail sales for KeVita over a 52-week period ending on Oct. 12 are over $46 million, not including additional revenue from natural, independent and specialty channels. The company has experienced consistent trailing 52-week growth of between 80 to 100 percent each year since 2014. In October, company sources told BevNET that KeVita is on course for revenues between $80 to $100 million this year.

In a September 2014 interview with BevNET, Moses said he saw the partnership as an opportunity to enter new distribution channels and create broader awareness of probiotic drinks.

“We see it really becoming a ubiquitous offering, much like the fresh juice companies’ [products],” Moses said. “So everywhere you see an Odwalla or a Naked or a Bolthouse, I believe you are going to see KeVita and kombucha.”

Moses, a former investment banker, and his cofounder, nutritionist Chakra Earthsong Levy, have overseen rapid growth since founding KeVita in 2009. The company produces a variety of organic probiotic drinks, including master brew kombucha, a drinking tonic and a sparkling drink based on a water kefir that is their best-selling item.

According to a report by Markets and Markets, the global probiotics market is expected reach around $24 billion by 2017.

The company has undergone at least four rounds of investment since its founding, and has used Whipstitch Capital’s Mike Burgmaier and Nick McCoy as its primary financial advisers since 2012. SPK Capital LLC provided $6 million in capital in 2014, following a Series B investment by private equity firm KarpReilly in 2012. The Ecosystem Integrity Fund is also an investor.