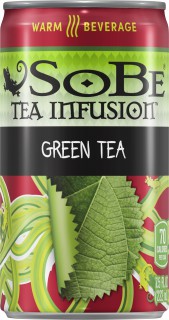 Here’s a hot story: PepsiCo recently completed a test of warmed soft drinks and teas at approximately a dozen CVS locations in the Boston area. Packaged in 7.5 oz. cans, the beverages were displayed in a countertop warming cabinet heated to 122°F. PepsiCo wrapped the test about two weeks ago and is currently reviewing sales data, according to company spokesperson Gina Anderson.

The products included a SoBe green tea, a Lipton tea flavored with lemon, and two Caleb’s Kola drinks, one of which contained added ginger flavor. PepsiCo also introduced a couple new of beverages: Ripe Harvest, an apple-flavored drink and the lemon-flavored Lemon Soothe. The products were all non-carbonated and priced at $1.49 per can.

Citing “competitive reasons,” PepsiCo declined to comment on how long the beverages had been in development nor on the length of the test.  In a statement emailed to BevNET, PepsiCo said that it is “always innovating and testing new products to bring consumers a wide variety of great-tasting beverages to fit all drinking occasions.” 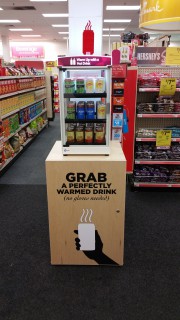 Rarely seen in the U.S., warmed RTD beverages are popular in Japan — particularly in colder months — where they are commonly sold in vending machines that have been manufactured to dispense both hot and cold drinks. Coca-Cola and tea giant Ito En are two of the largest suppliers of RTD beverages designed to be consumed warm: Coke markets a line of canned coffees under its Georgia Coffee brand, while Ito En sells its Oi Ocha green tea in bottles and cans that can be heated.

“[It’s] a widely accepted Japanese merchandising practice in grocery and C-store operators, where accounts like 7-Eleven use ‘hot/cold machines’ that stock both heated and chilled versions of the same beverage in different compartments of the unit,” said Adam Hertel, SVP of Sales – Grocery & Alternate Channels, Ito En North America. “Because the Japanese are very comfortable and accustomed to drinking their beverages in heated RTD format, it’s a much different scene than we have here.”

With heated RTD drinks gaining traction in other countries, including China and India, it was “something [PepsiCo] wanted to gauge” in the U.S., Anderson said.

While heated still beverages like coffee and tea are ubiquitous in Japan, carbonated drinks served hot are a rare sight. In September, 2013 Coke introduced Canada Dry Hot Ginger Ale, and hailed the product as “the world’s first sparkling beverage meant to be enjoyed warm.” Made with real ginger extract and apple and cinnamon flavors, Coke said it spent four years developing the beverage, which was produced using “advanced carbonation technology [that] delivers a sparkling sensation,” according to the company. However, the ginger ale was discontinued in 2014.