Seattle-based Pier Coffee celebrates the start of 2016 with its launch of single-origin, certified organic cold brew coffee in a can. Cans of Pier cold brew are crafted in Pier Coffee’s Pacific Northwest brewery using a unique brewing system and are now available at retail grocery stores, cafes, restaurants and bars in Oregon and Washington.

Pier Coffee, an exclusively cold brew coffee company, was founded in 2014 by coffee veteran, Erin Williamson. While owning a speciality cafe, Erin noticed that customers who regularly ordered heavily flavored lattes could be convinced to switch to cold brew in the summer and enjoy the drink black. Erin saw cold brew as a vehicle for introducing the vibrant and complex origin flavors of coffee to more people. Inspired by the possibilities of cold brew, Erin left the cafe business to start Pier Coffee in a 90 square foot “nano-brewery.” Pier Coffee’s flagship product is a single-origin, seasonally sourced cold brew concentrate. In the early days of the business, Pier Concentrate was delivered to Seattle-area cold brew drinkers on a weekly delivery route. Erin Williamson recalls, “Friends and family basically kickstarted Pier by making weekly delivery orders. I’d pack bottles of coffee in my car and drive them around before dawn on Monday mornings, like a milkman. The recurring orders allowed Pier Coffee to grow and eventually expand into grocery stores.” 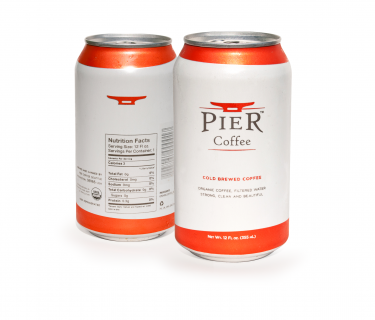 With placements in local grocery stores, Pier Coffee expanded from the 90 square foot nano-brewery to a 1600 square foot micro-brewery with plans to move into a 12,000 square foot space in April. In addition to their flagship concentrate product, Pier Coffee also crafts a 100% certified organic canned cold brew with no preservatives or additives – the first product of its kind in the world. Using Erin Willliamson’s background in specialty coffee, Pier Coffee is brewed by marrying the principles of coffee extraction with beer brewing science. At the Pier Brewery, attention is paid to time, temperature, pressure, agitation, atmosphere, grind size as well as water conditioning and grain beds. Specially designed brewing vessels were built to bridge the gap between coffee and beer brewing. These unique brewing methods allow Pier Coffee cold brew to have a fruit-forward, origin based initial flavor as well as a chocolatey finish that is typical in cold brew. The resulting products have been called the “best packaged cold brew on the market” by Andrew Caldwell and received 90+ point rankings in Coffee Review.”

“At Pier, we’ve been working for months to create a cold brew that is preservative and additive-free but still maintains its quality and reflects its origin flavor,” says Erin Williamson who nowacts as Head Brewer at Pier Coffee. “We couldn’t be more thrilled with the outcome of our canned product and look forward to sharing it with more and more people.”

In addition to a focus on the unique science of cold brewing, Pier Coffee is also committed to sourcing coffee from women owned farms and cooperatives whenever possible. Erin Williamson notes, “80-90% of the field work of growing coffee is done by women but often women only own 10-20% of the product grown or the land on which it is grown. Gender equity in sourcing is a key focus of ours and something we consider along with flavor profile whenever selecting green coffee for our cold brew.”

More information about Pier Coffee can be found at www.piercoffee.com