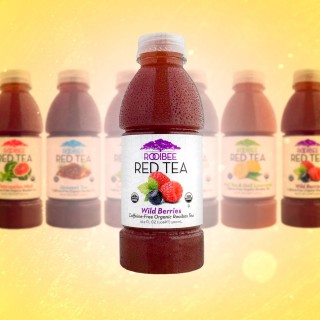 The Newport, Ky.-based company is switching from 12 oz. to a 16 oz. plastic bottle featuring an updated logo, a move CEO David Salmon says will help the brand to better reflect consumer preferences within the RTD tea market.

As with Rooibee’s existing line, the new flavors — Wild Berry, Sweet Tea, and Half and Half Lemonade — are all-natural, Certified Organic and non-GMO.

The rebranding follows a transitional period for Rooibee Red Tea. Salmon took over as CEO in April, less than one year after his predecessor Bryon Evans was hired for the position; Evans joined the company following the departure of Heather Howell, who became the director of innovation for spirits giant Brown-Forman. Rooibee Red Tea moved its offices from Louisville to Newport in September, 2015.

“Now that the brand has had a transition, we wanted to realign it to reflect our consumers’ preferences within the non-GMO beverage arena,” said Salmon. “As organic goes mainstream, we felt it was best to promote flavors that consumers are looking for.”

As part of the overall brand realignment, Salmon said the company was also seeking new distribution partners, starting in the Midwest. Rooibee Red Tea is currently available in Whole Food, Kroger and Ingles.

“We are pushing to get into national chains of both premium groceries and convenience stores,” he said, calling the latter a “big opportunity” for Rooibee.

The overhaul at Rooibee Red Tea also hints at an uncertain future for Rooibee Roo, a line of RTD teas for kids launched in 2014. Salmon said that the product was being “put on the shelf for the short term” while the company focuses on its core business.

“We will possibly take another look at that area in the future,” said Salmon. “When we do that, we’ll also be looking at other beverage types. There will be a complete review of that as we move forward.”