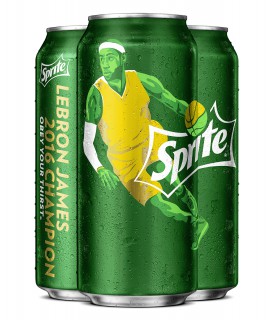 ATLANTA–(BUSINESS WIRE)–The wait is finally over. After 52 years, The Land is once again a home of champions, thanks to a transcendent performance from one of Ohio’s very own – LeBron James.

Today SPRITE® is launching a social media campaign called #DapTheKing to help fans salute King James. Inspired by the creative handshakes shared throughout the season between James and his teammates, SPRITE invites fans to perform their own handshakes to commemorate the historic win. Fans nationwide are invited to record videos of themselves performing celebratory LeBron-style handshakes with fellow fans and post on social media using the hashtag #DapTheKing and tagging @Sprite.

“SPRITE began working with LeBron in 2003 before he played his first professional game,” said Stuart Kronauge, senior vice president, Brand Marketing, Coca-Cola North America. “Even as an 18-year-old, we could see how passionate he was about bringing The Land a title. The Coca-Cola Company has been lucky to follow him on this 13-year journey, so it’s an absolute joy to support his fans in celebrating the special moment.”

The SPRITE #DapTheKing campaign is supported by a digital video featuring viral basketball influencer Brandon “BdotAdot5” Armstrong. In addition, SPRITE is celebrating The Land’s victory with the release of a limited-edition 16-ounce can. The commemorative SPRITE can, featuring a bold yellow-on-green illustration of James, will be available at participating retailers in Ohio starting later this week and while supplies last.

The Coca-Cola Company (NYSE:KO) is the world’s largest beverage company, refreshing consumers with more than 500 sparkling and still brands and more than 3,800 beverage choices. Led by Coca-Cola, one of the world’s most valuable and recognizable brands, our company’s portfolio features 20 billion-dollar brands, 18 of which are available in reduced-, low- or no-calorie options. Our billion-dollar brands include Diet Coke, Coca-Cola Zero, Fanta, Sprite, Dasani, vitaminwater, Powerade, Minute Maid, Simply, Del Valle, Georgia and Gold Peak. Through the world’s largest beverage distribution system, we are the No. 1 provider of both sparkling and still beverages. More than 1.9 billion servings of our beverages are enjoyed by consumers in more than 200 countries each day. With an enduring commitment to building sustainable communities, our company is focused on initiatives that reduce our environmental footprint, create a safe, inclusive work environment for our associates, and enhance the economic development of the communities where we operate. Together with our bottling partners, we rank among the world’s top 10 private employers with more than 700,000 system associates. For more information, visit Coca-Cola Journey atwww.coca-colacompany.com, follow us on Twitter at twitter.com/CocaColaCo, visit our blog, Coca-Cola Unbottled, atwww.coca-colablog.com or find us on LinkedIn at www.linkedin.com/company/the-coca-cola-company.